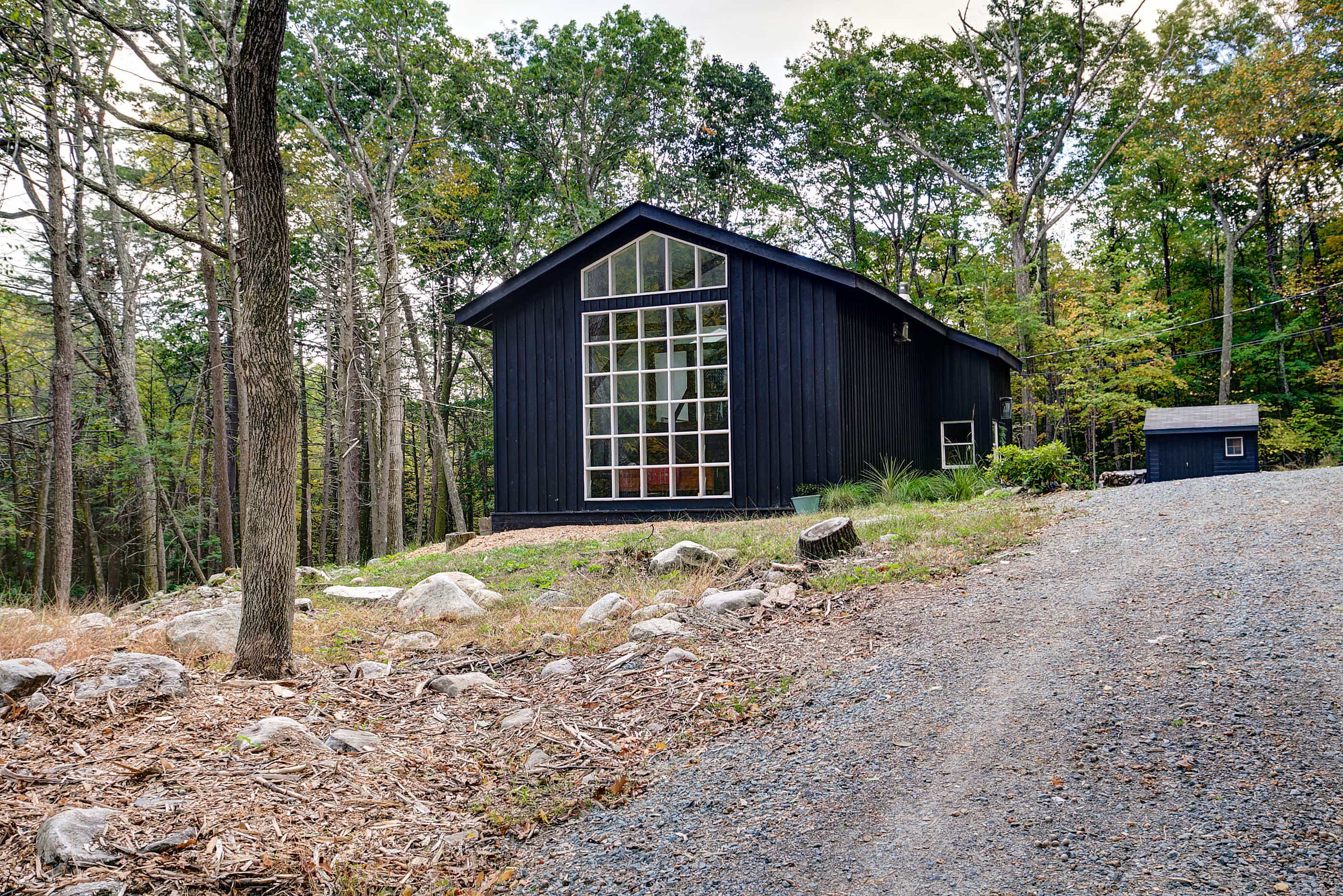 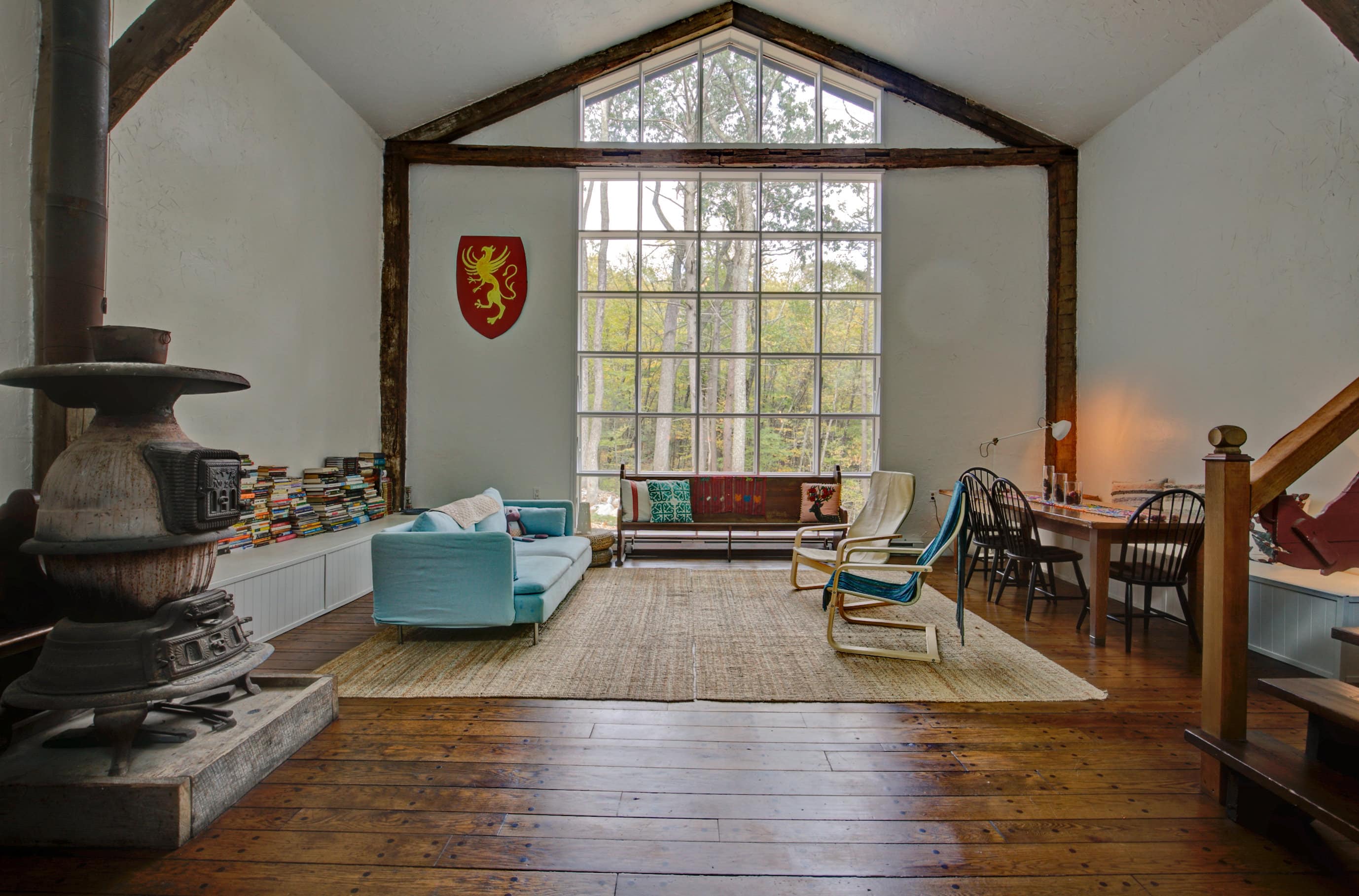 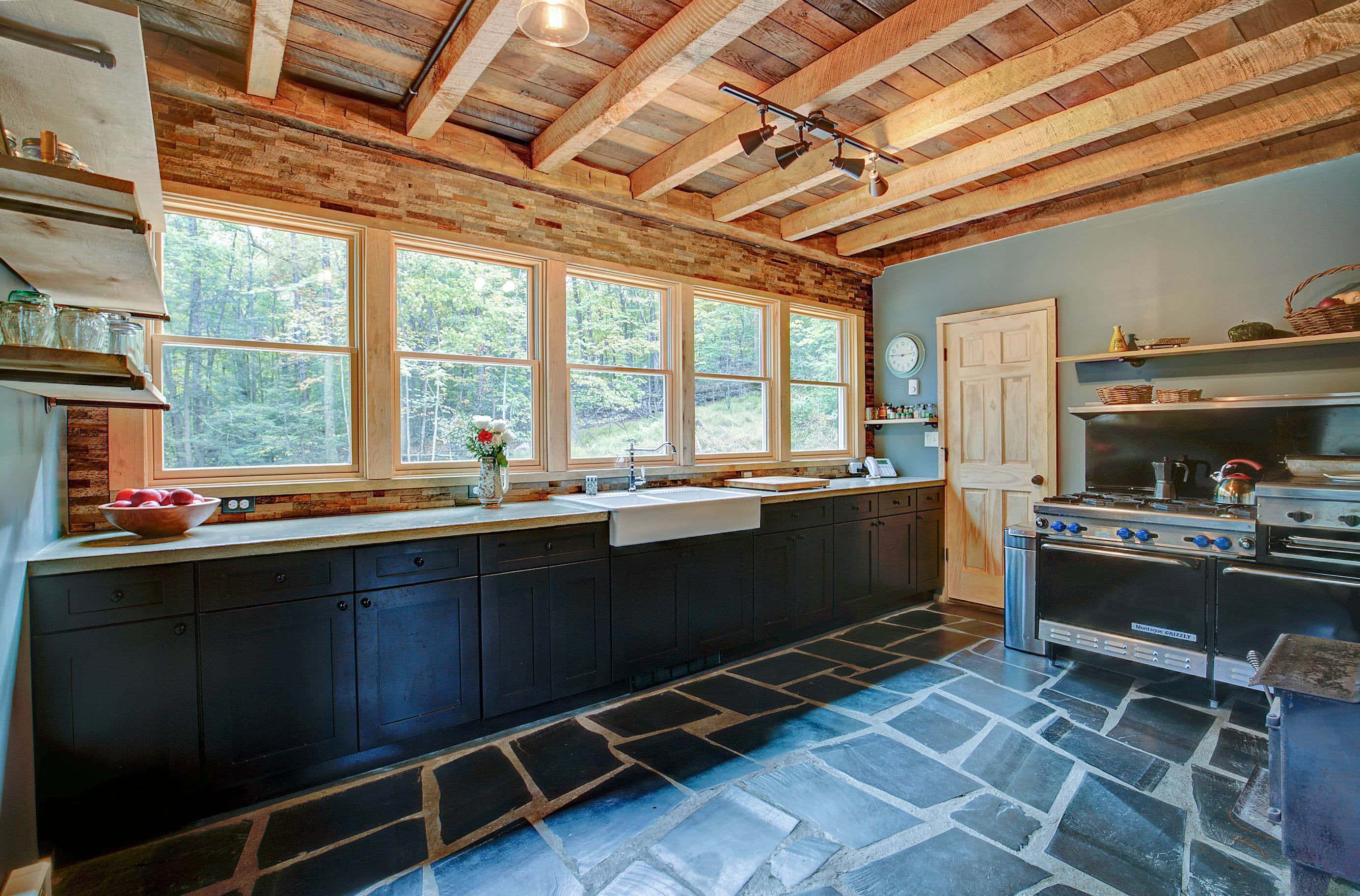 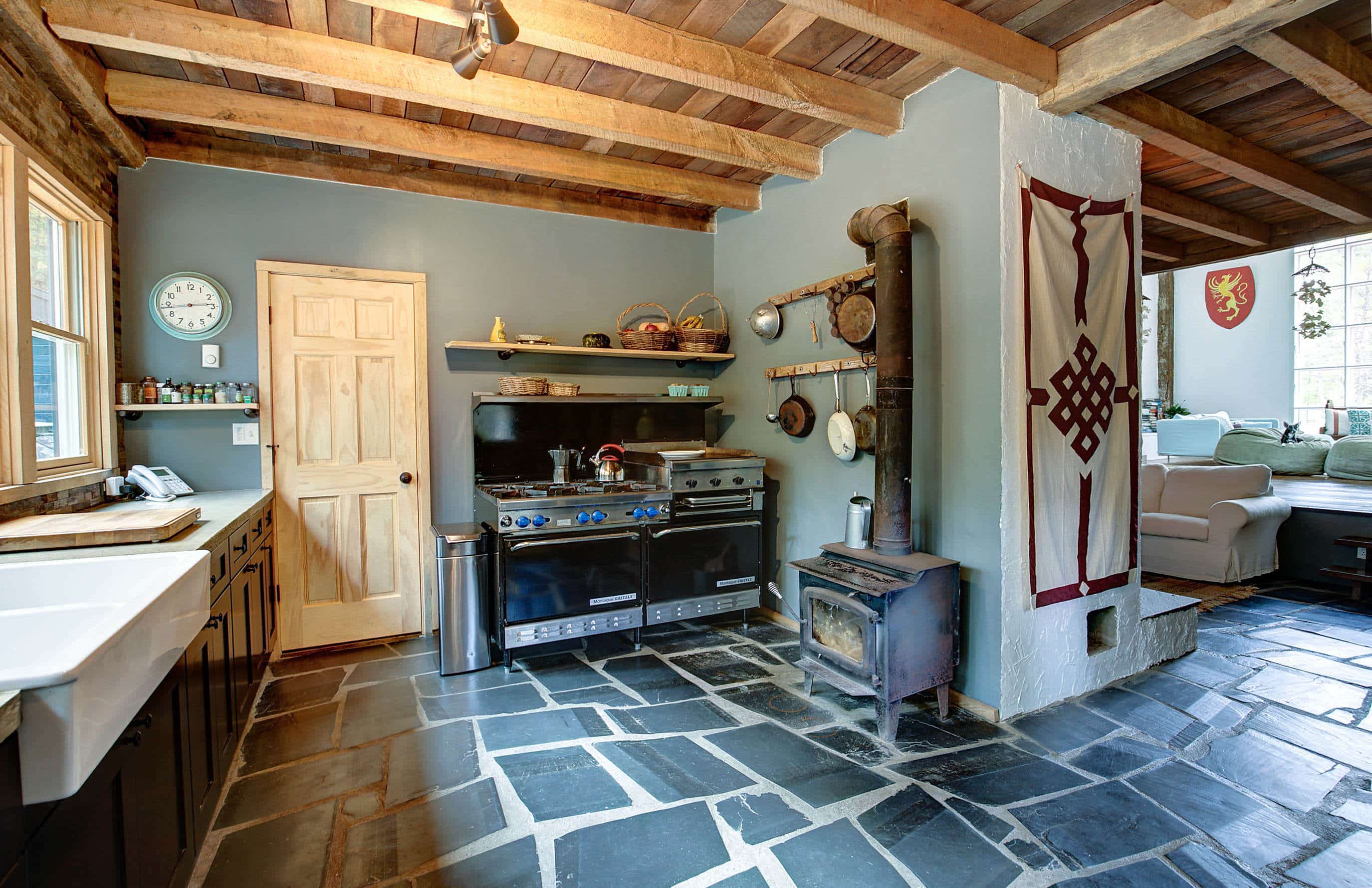 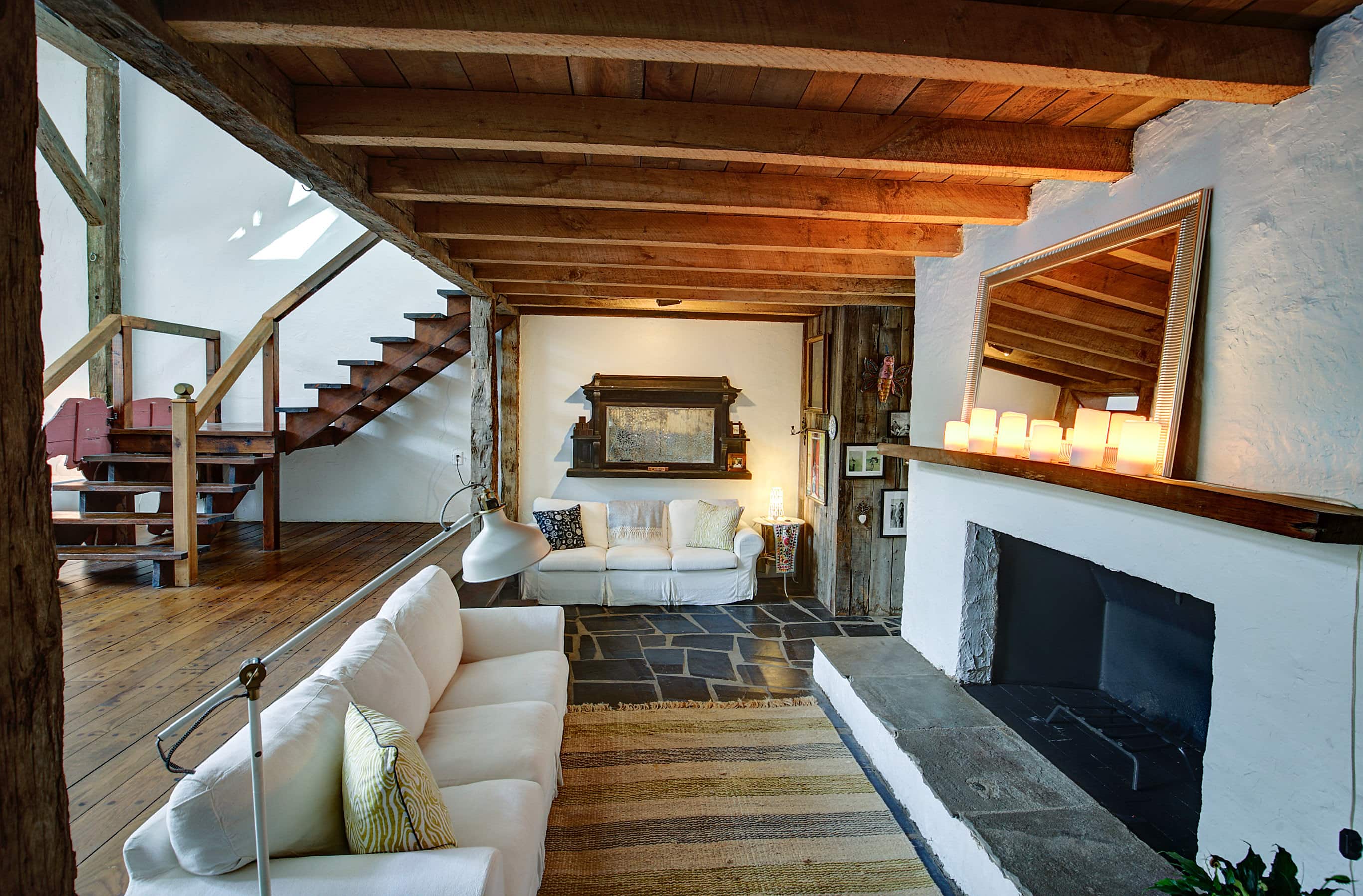 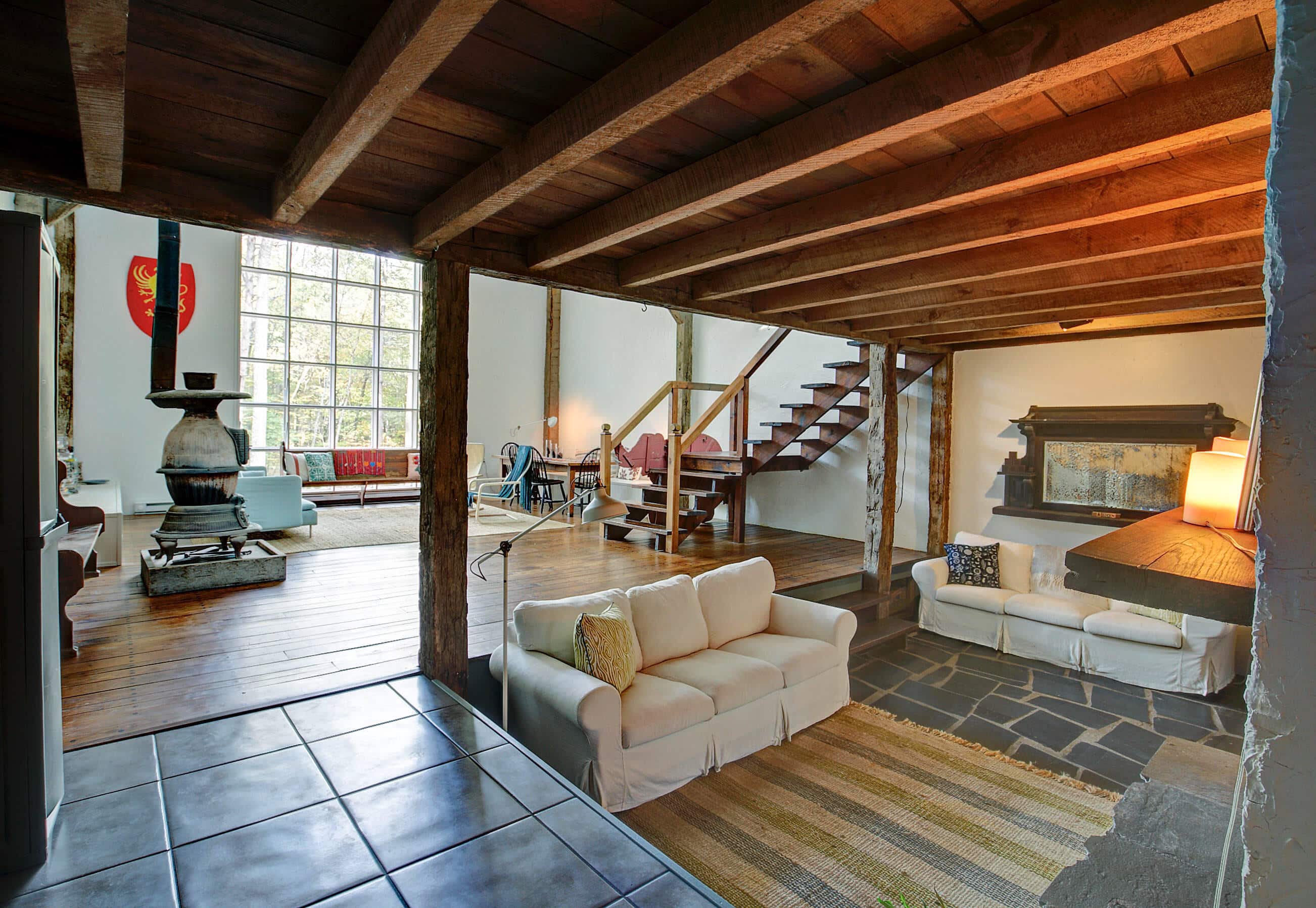 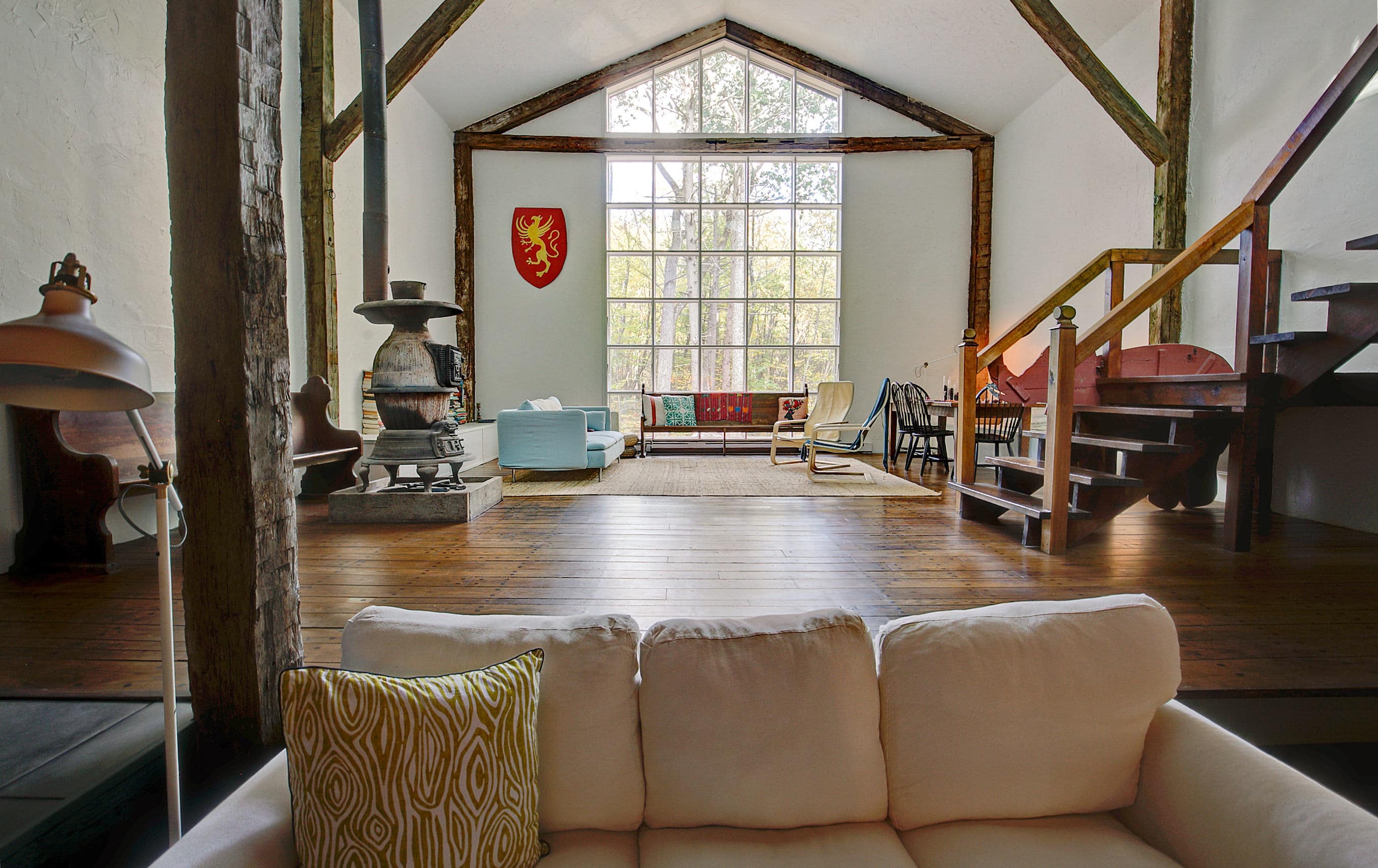 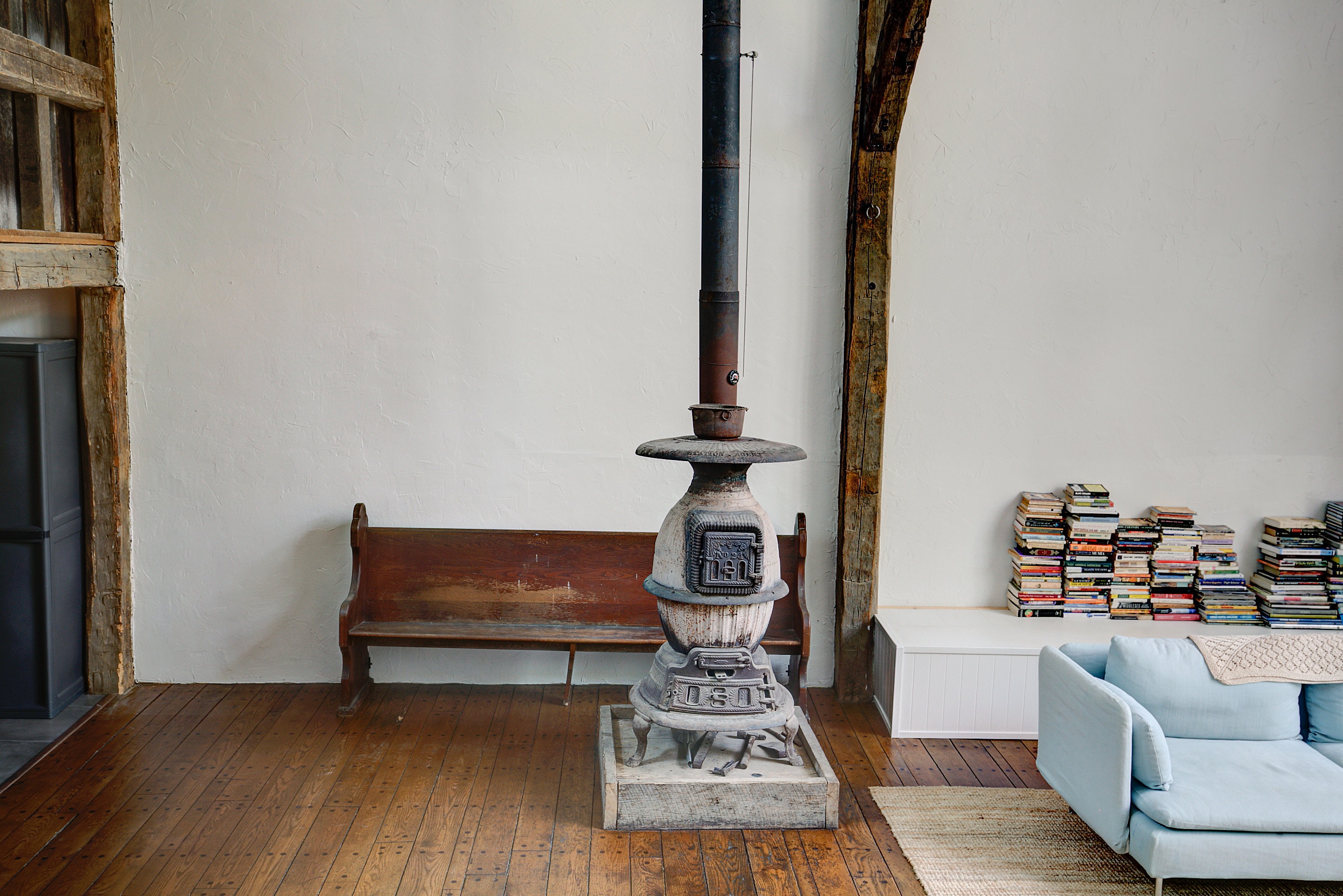 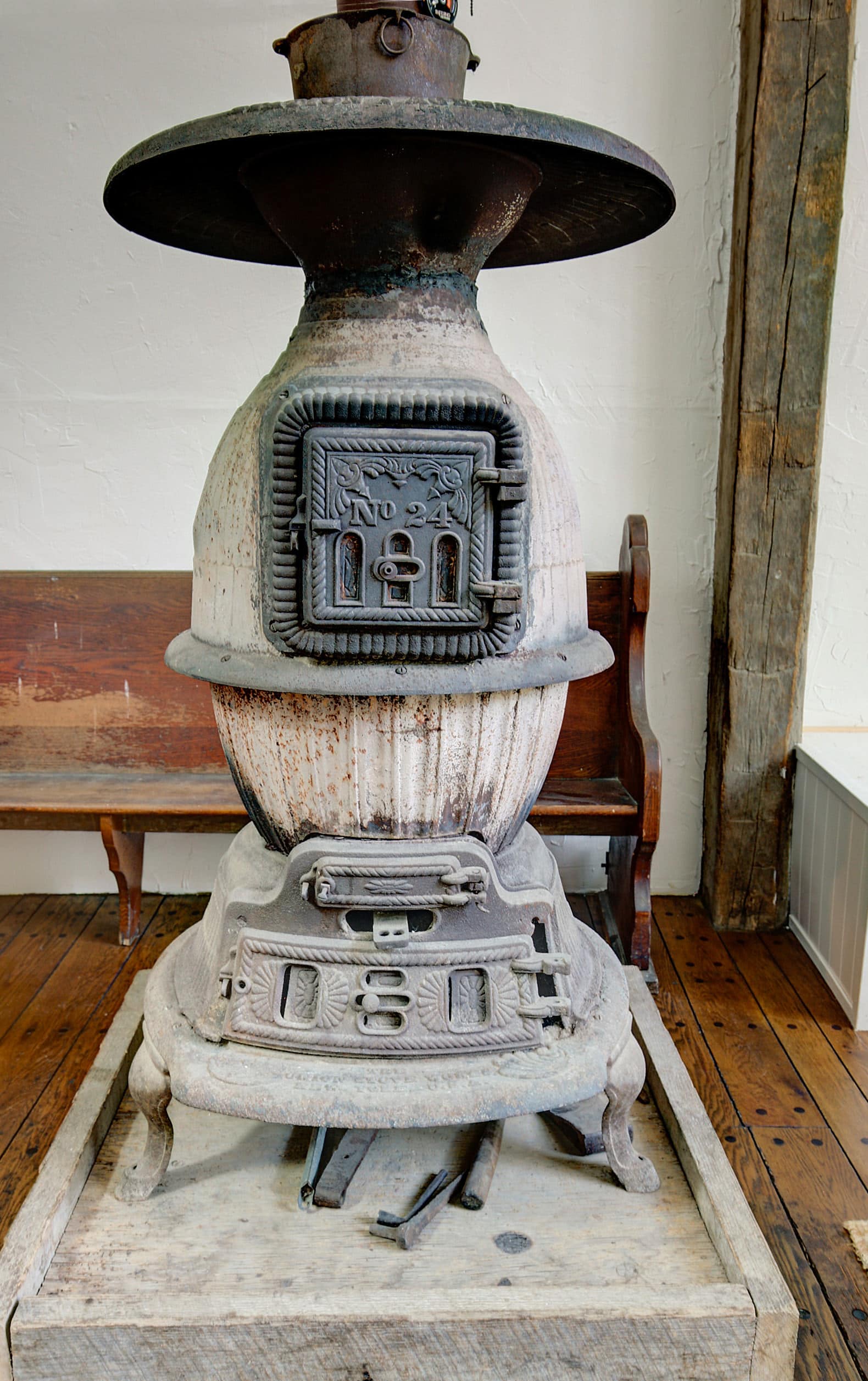 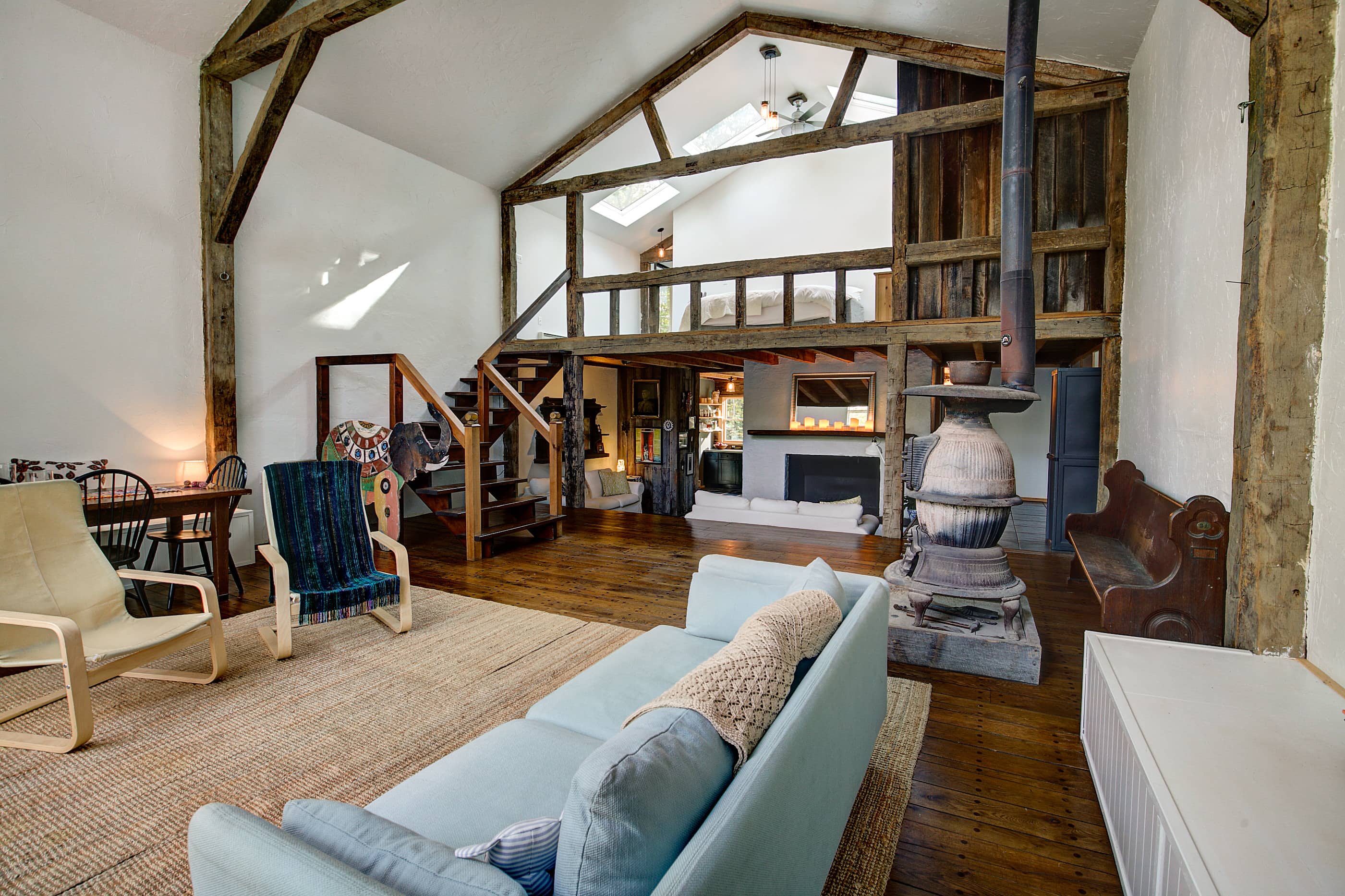 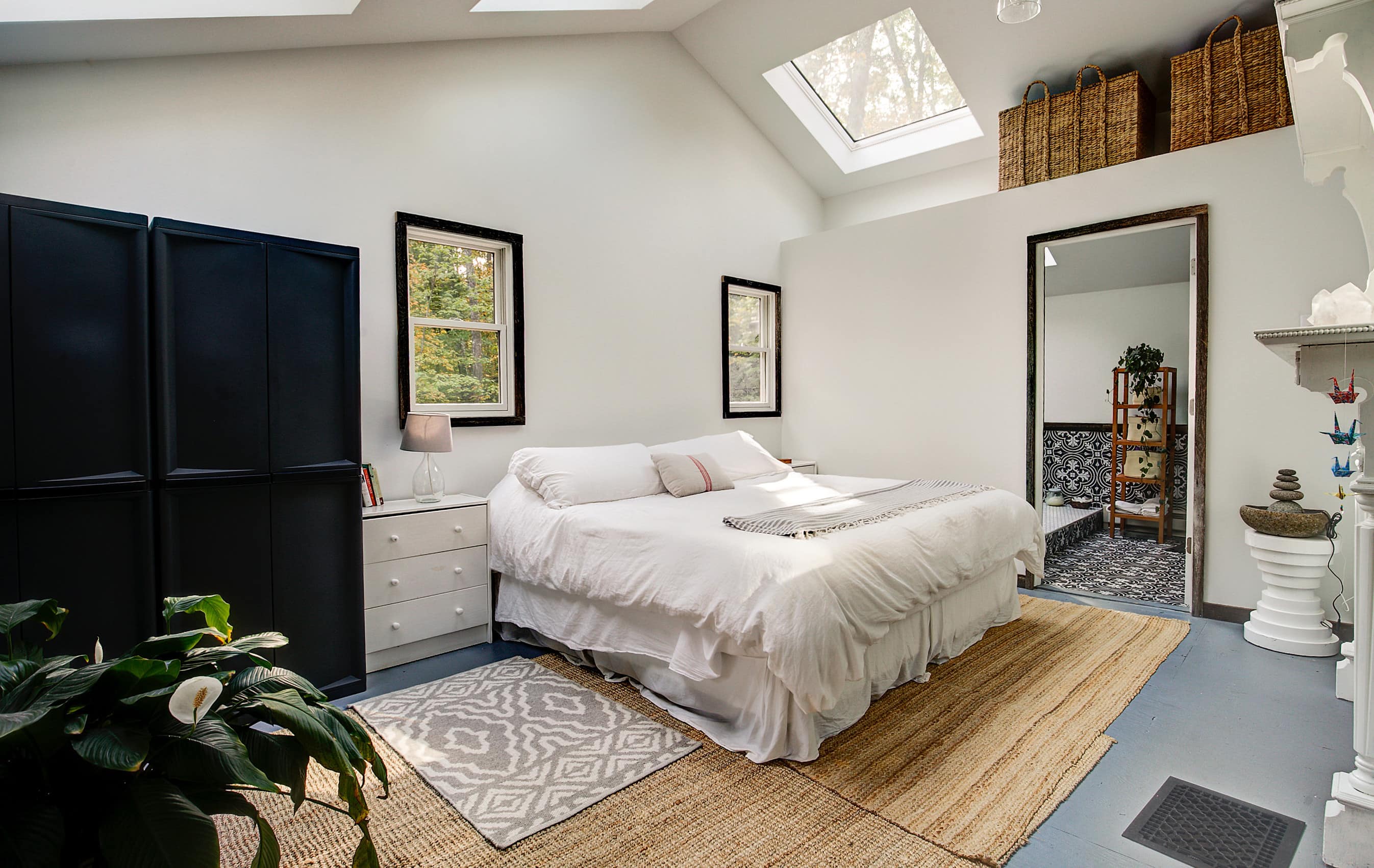 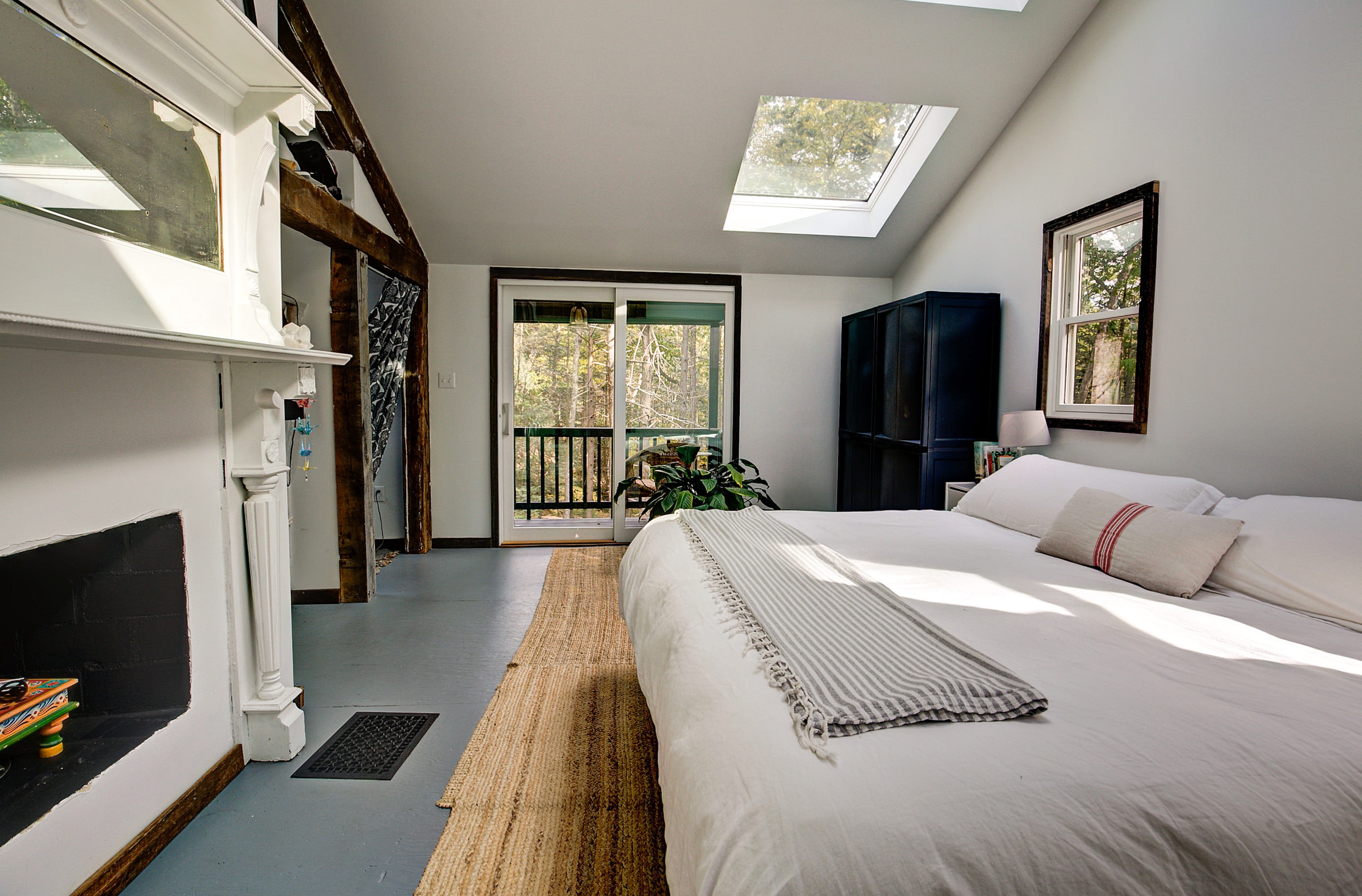 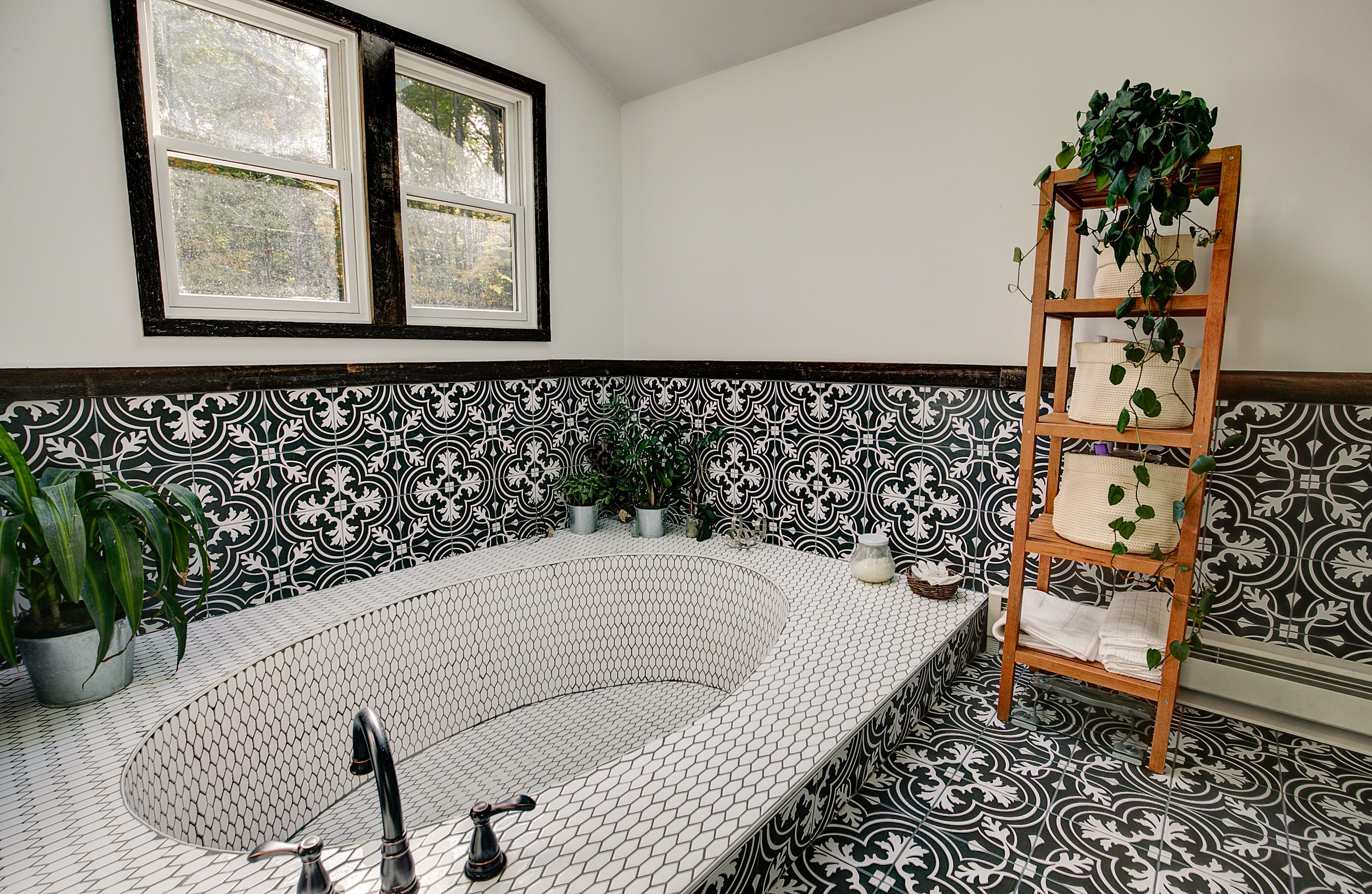 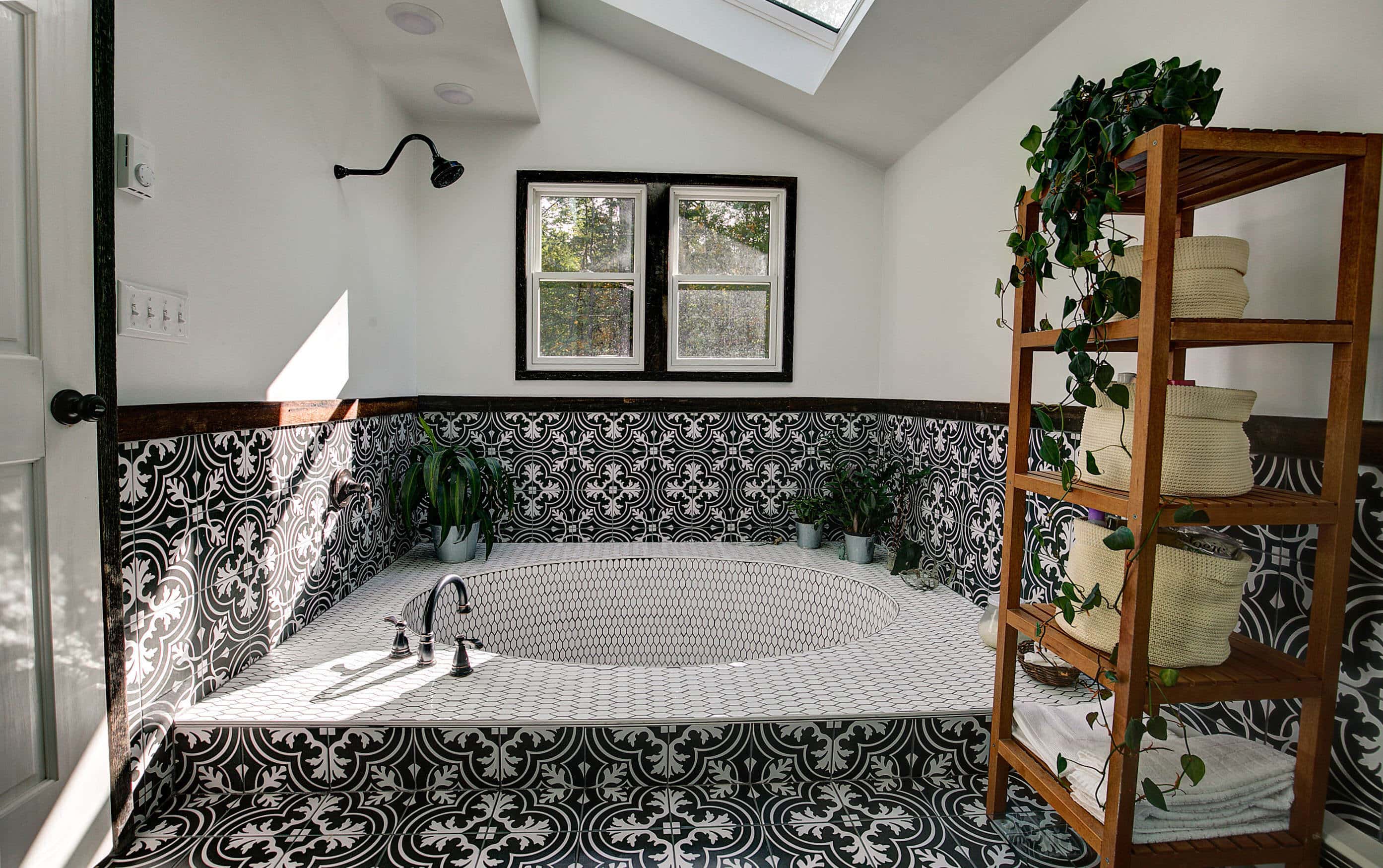 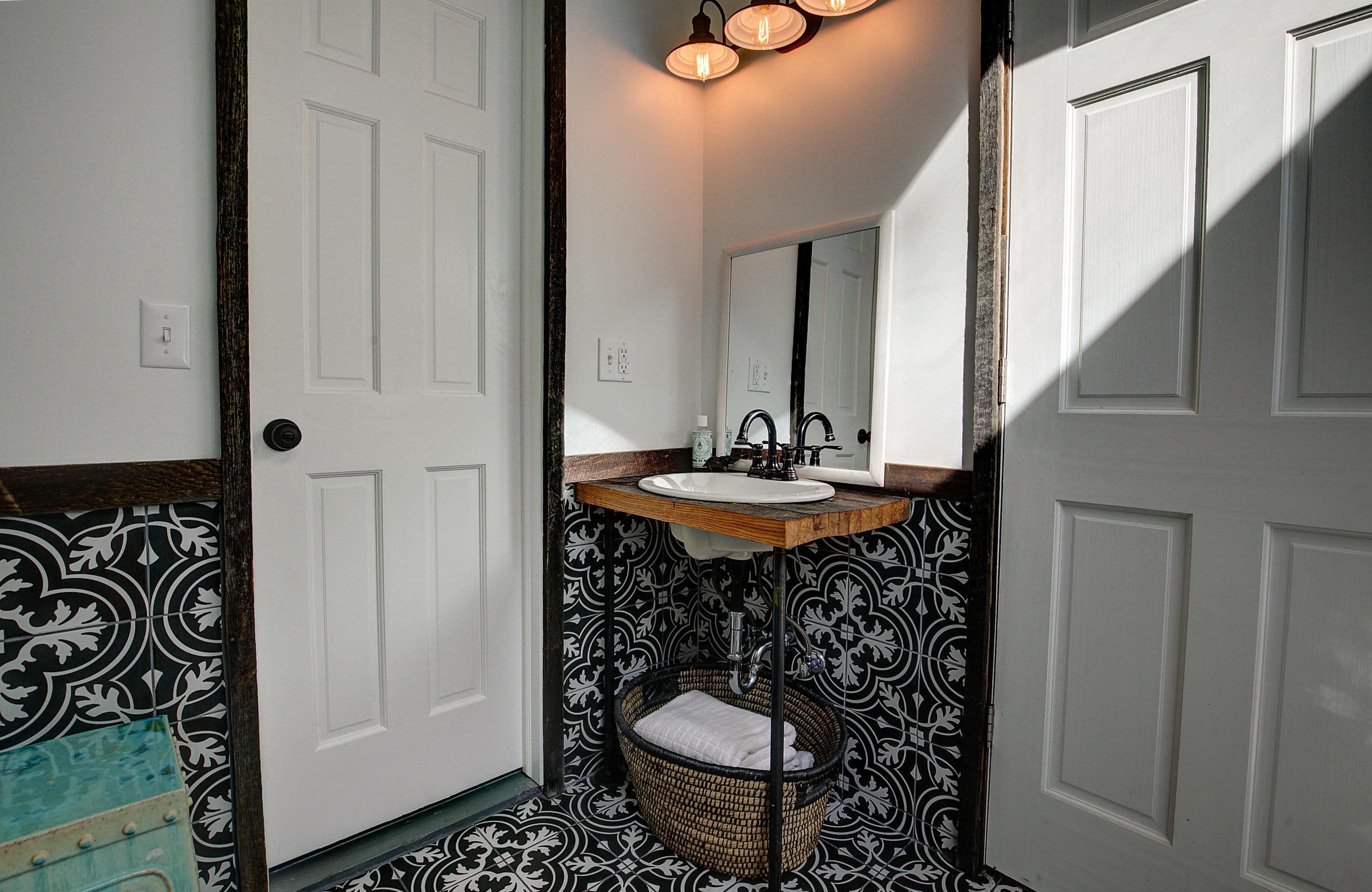 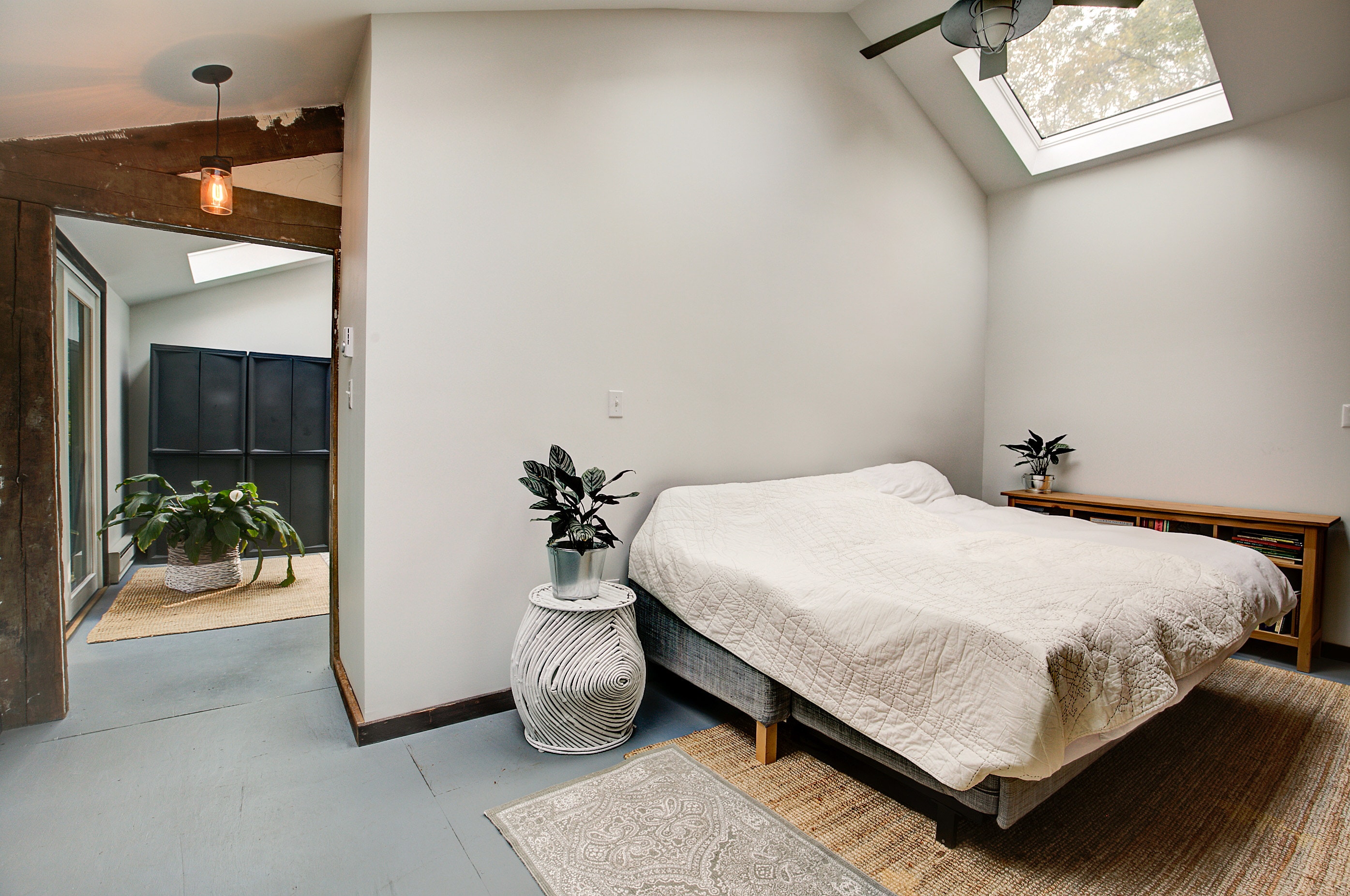 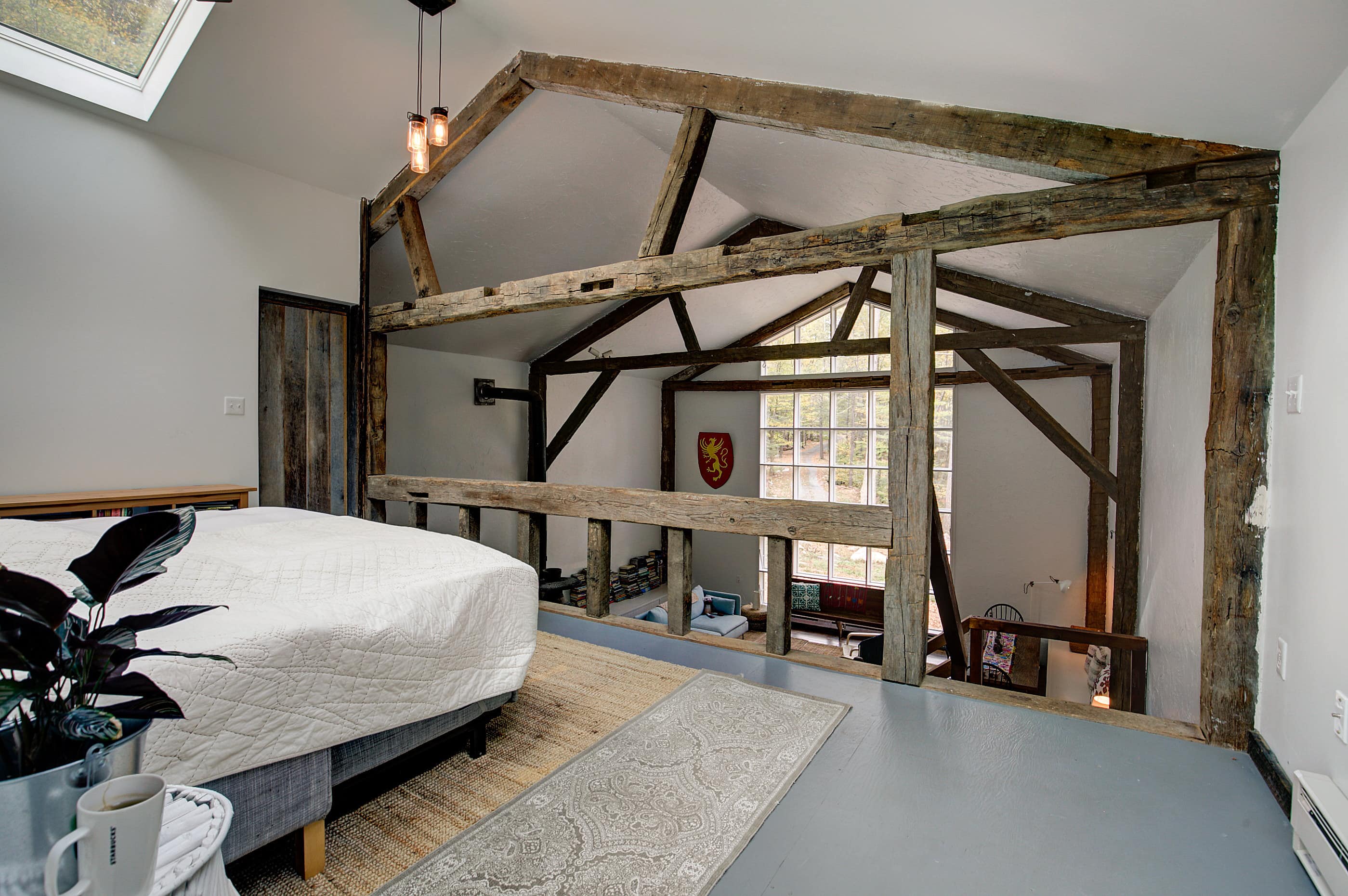 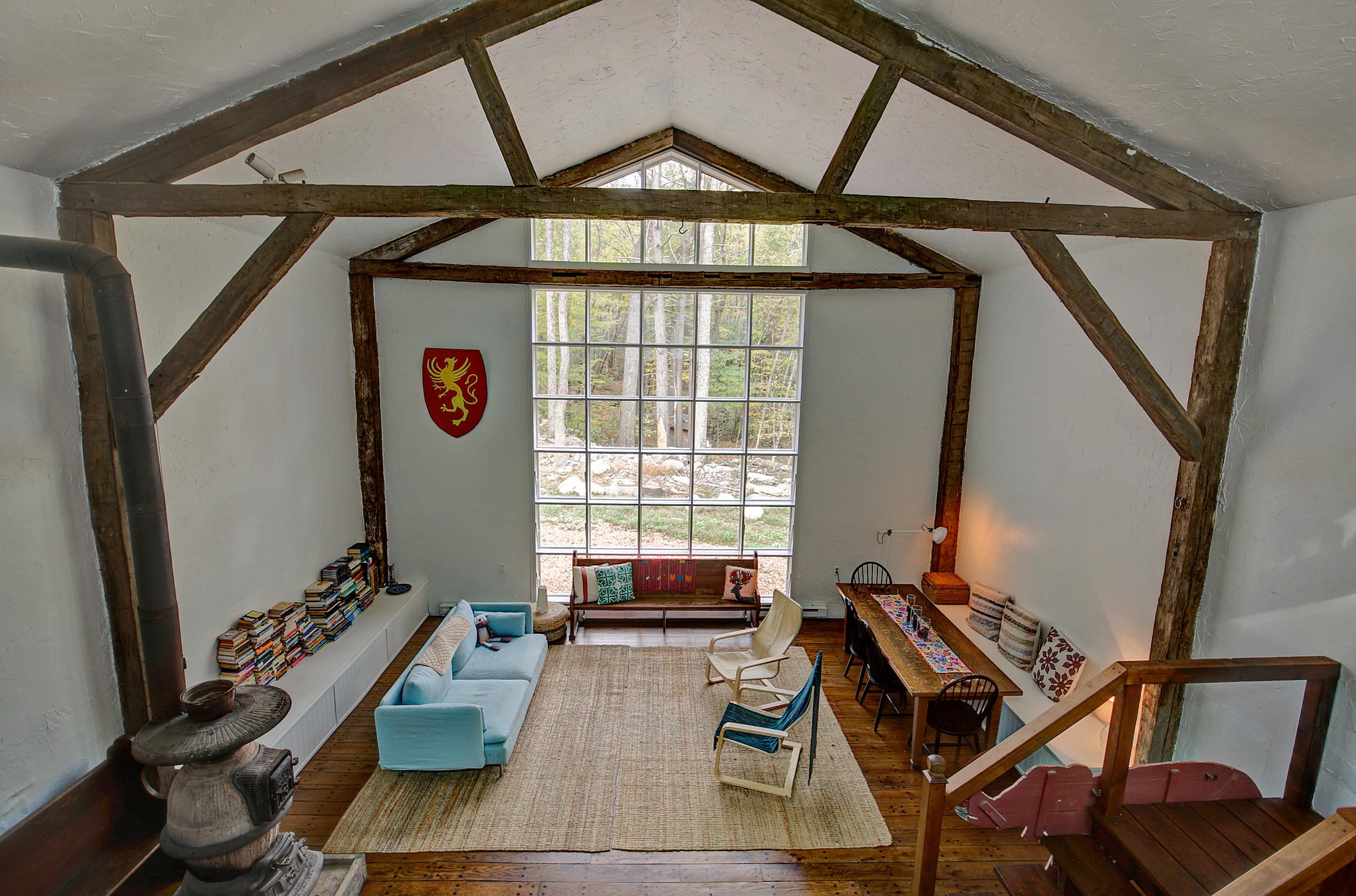 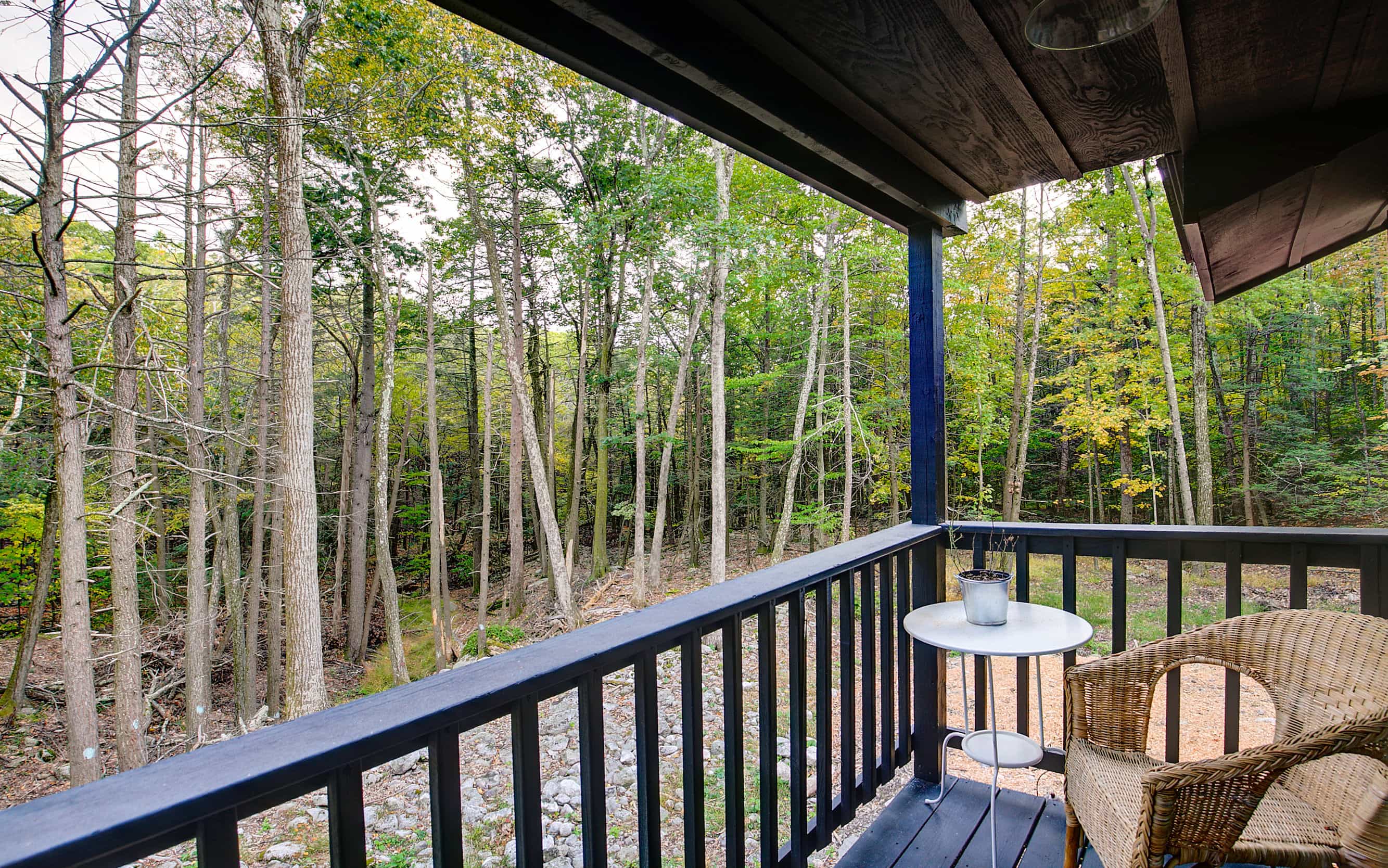 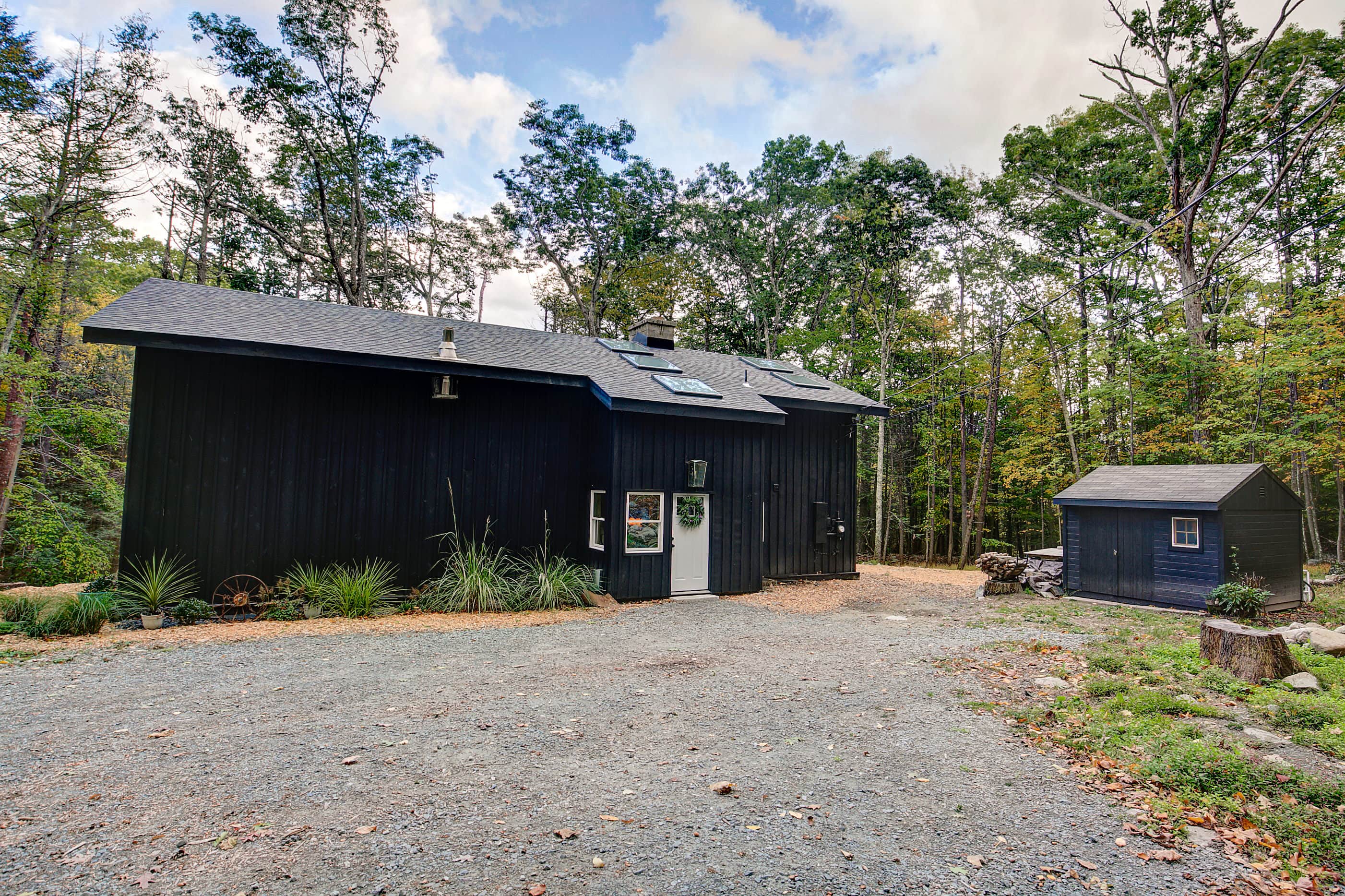 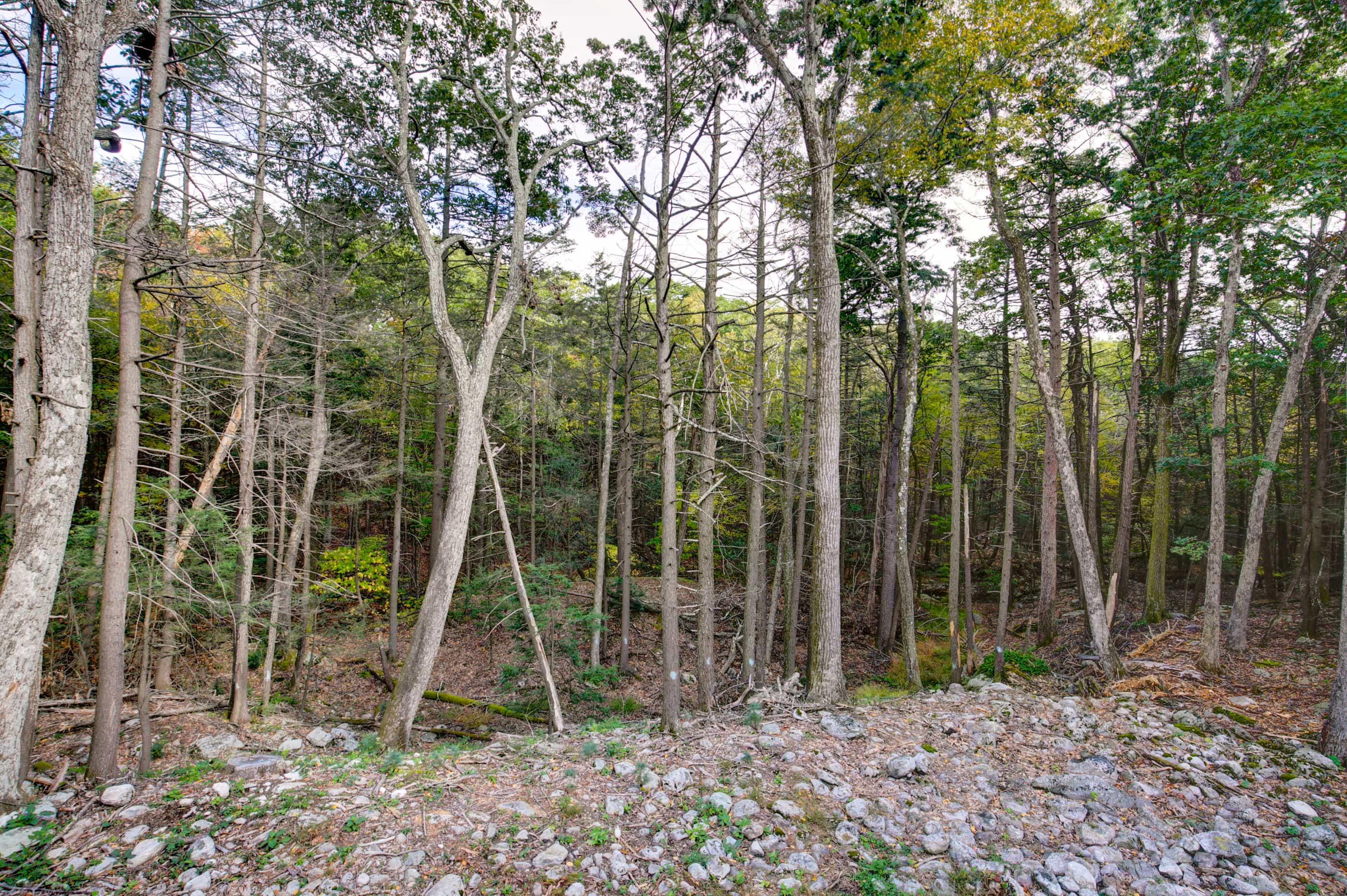 This jaw-dropping contemporary home is 75 miles from NYC, and its special character is immediately evident in the drive up to it. Arriving on Route 52 gives easy access to the city alongside mountain views rarely seen this far south. The long driveway curves next to the Plattekill Creek and is lined with massive, mature trees. The house appears at the end of the drive, looking like someone dropped a Scandinavian country house into the small valley.

Entering the house, you first see the sunken den with the first of two wood-burning fireplaces in the home. It’s an immediate contrast to the 19-foot-high ceilings of the living room, arguably the show-stopper of the house. Six of the many, many windows on this wall are operable, allowing for a nice breeze and easier acoustic access to the sounds of the Plattekill Creek. An antique wood stove from the Pine Bush train station could be swapped for something more modern – or cherished for its utterly unique look.

The kitchen is also on the ground floor and includes a wall of windows facing the forest. A commercial stove was purchased decades ago to match one of the ones in the hotel, and the lifetime warranty ensures that the new owners will be able to cherish its retro good looks for as long as they want. The kitchen has another small woodstove to supplement the baseboard heating, a small deck, and the utility/laundry room.

Going upstairs, there’s a loft area overlooking the living room that can be used for an additional guest space, an art or yoga studio, reading area, or anything else. The skylights and the perspective on the living room windows make you feel surrounded by nature indoors.

The master suite has another wood-burning fireplace, skylights, cathedral ceilings, a balcony overlooking the forest and creek – and one of the deepest soaking tubs around. During renovations, they decided that the massive cast iron tub in the master bath was too heavy to move, so they gave the bathroom the full tile treatment. The skylights and windows overlooking the trees here, again, complete the picture.

The two rooms not pictured here are a full bath (shower) downstairs and a smaller second bedroom on the second with sloping ceilings and a hidden bookcase/barn door that they built for their younger son. There’s also a shed on the property and lots of options for hardscaping and landscaping according to however the next generation wants to transform this special place for themselves.

The latest chapter for this home began in 1931 when the current owner’s grandfather, a Cuban immigrant, purchased 130 acres of land. Bob Jeronimo, his son, a sculptor and set director living in NYC, built this home with friends and mostly reclaimed materials in 1971. His 8 acres were carved out from the original parcel his father bought to create the Jeronimo’s resort, sold in 2007 to become Thich Nhat Hanh’s Blue Cliff Monestary, a Buddhist retreat center with a mission to “to share the practice of mindful living.”
Alexandra Jeronimo, Bob’s neice, had left the area for the Dominican Republic where she lives with her husband – both working for a luxury resort developer. They had decided to come back to the area for the birth of their second child and to take the opportunity to do justice to her uncle’s incredible home and studio.

In the past year or so, they have managed to maintain the unique ties to the past and the quirky charm of the original structure, while making important updates like changing all those north-facing windows to double-paned ones, improving insulation, putting on a new roof, and replacing appliances. They’re ready to head home and pass this house on to the next generation.

And for anyone who hasn’t discovered this corner of the Hudson Valley yet, the house is in Sullivan County, but part of it is in Ulster County, and it’s 5 miles to the Sam’s Point hiking area in the Minnewaska State Park. Pine Bush itself has a little health food store, a small vegan Chinese restaurant, and farmer’s market – and it’s a beautiful drive to lots of better known spots for Brooklyn weekenders like Kerhonskon, Accord, Ellenville, High Falls, New Paltz, Stone Ridge, and Rosendale.

The Plattekill Creek runs beside the house and is strong enough to be heard inside during the spring and summer months. This is one of those places where it’s very easy to imagine waking up in the master bedroom and stepping outside to enjoy a cup of coffee on your balcony (overlooking the creek!) or maybe taking a soak in the massive bathtub before starting the day.

This post was created in collaboration with Coldwell Banker Village Green Realty,located at 268 Fair Street in Kingston, NY 12401. 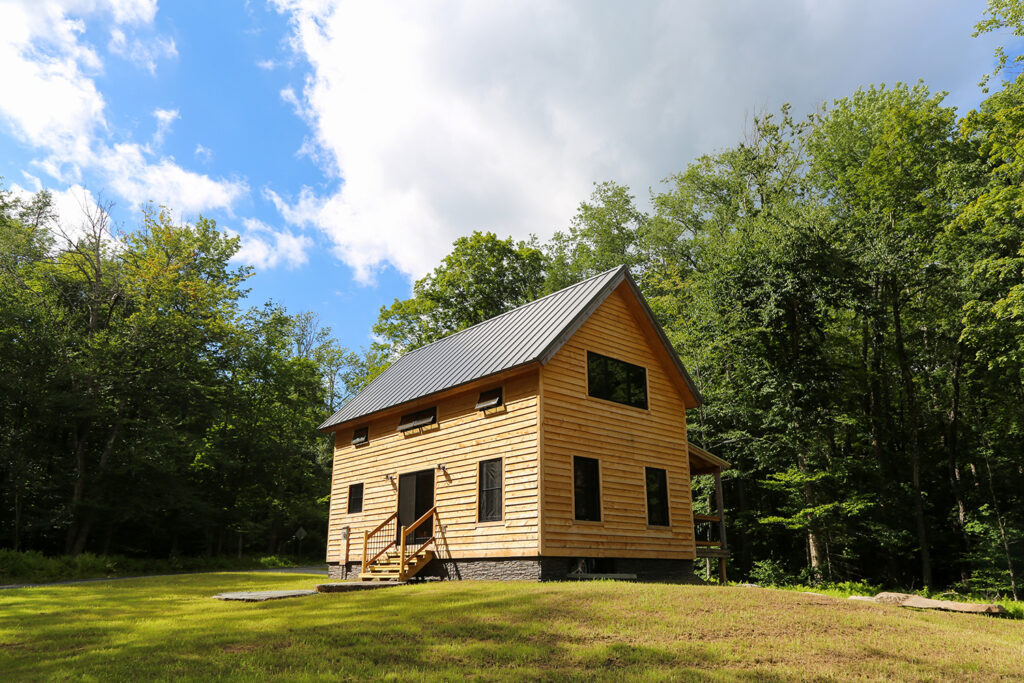 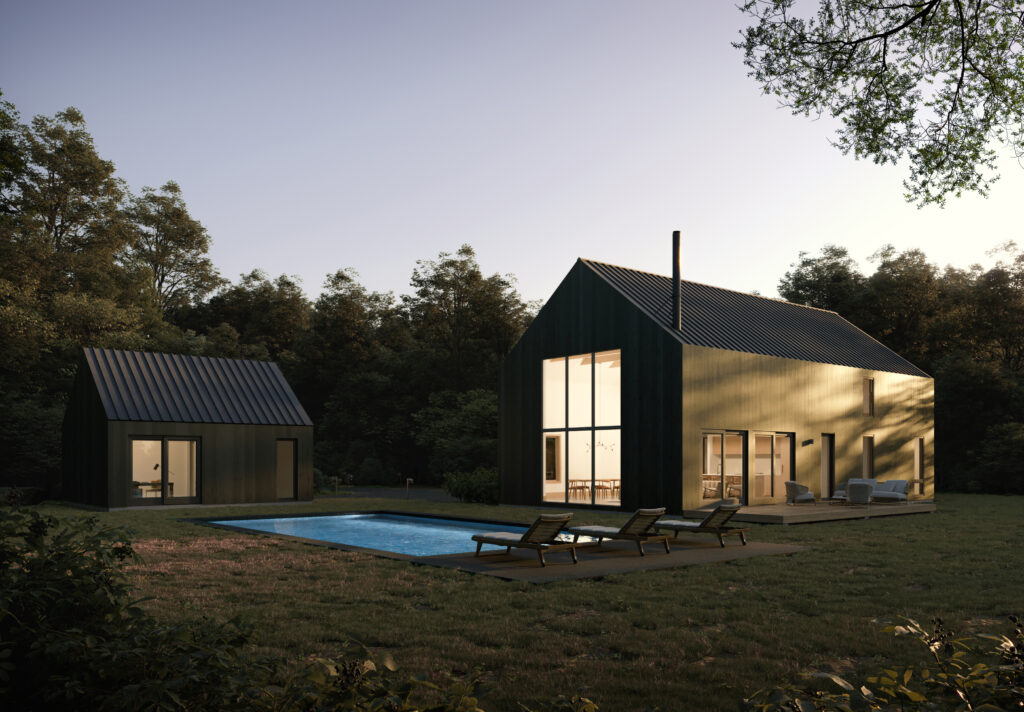 A Modern Home in Catskill, NY 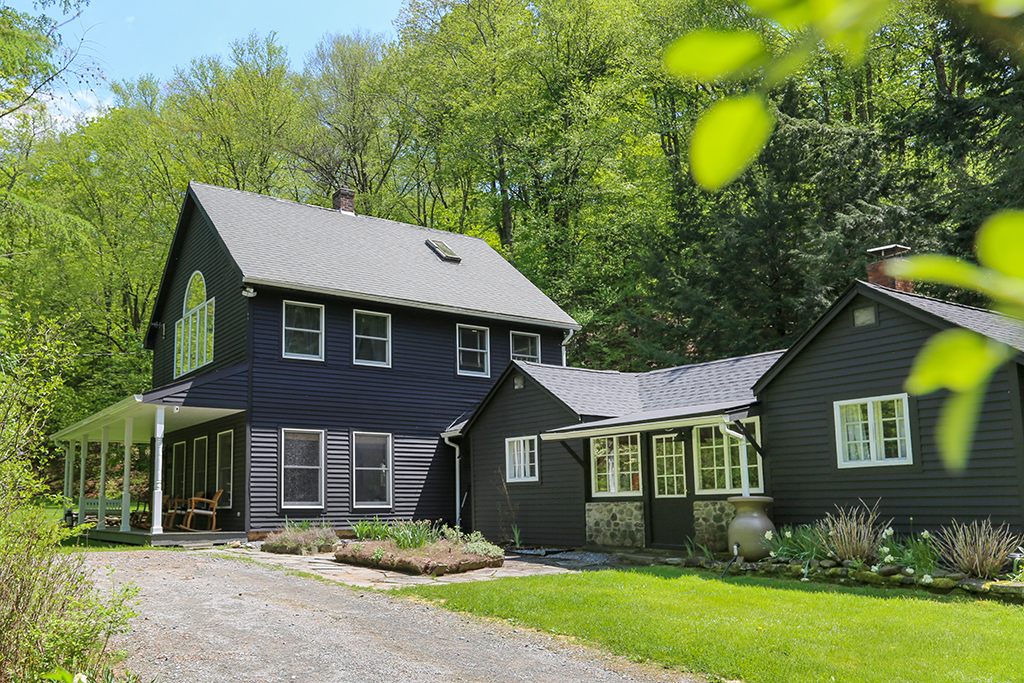 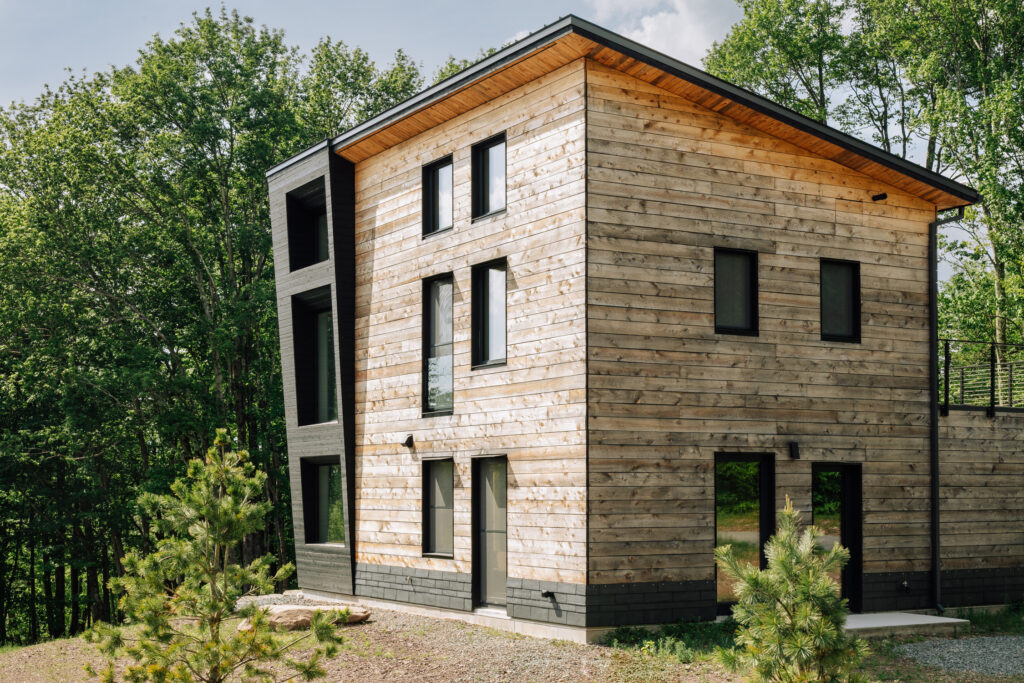 Two hours from NYC, The Catskill Project features 11 cutting-edge high-performance homes on more than 90 acres in Livingston Manor, NY. The Catskill Project is a community of beautifully crafted, next-generation homes that actively contribute to residents’ health and wellbeing. Each Passive House-designed home meets rigorous performance standards for exceptional air quality and a consistent, comfortable temperature in all seasons.