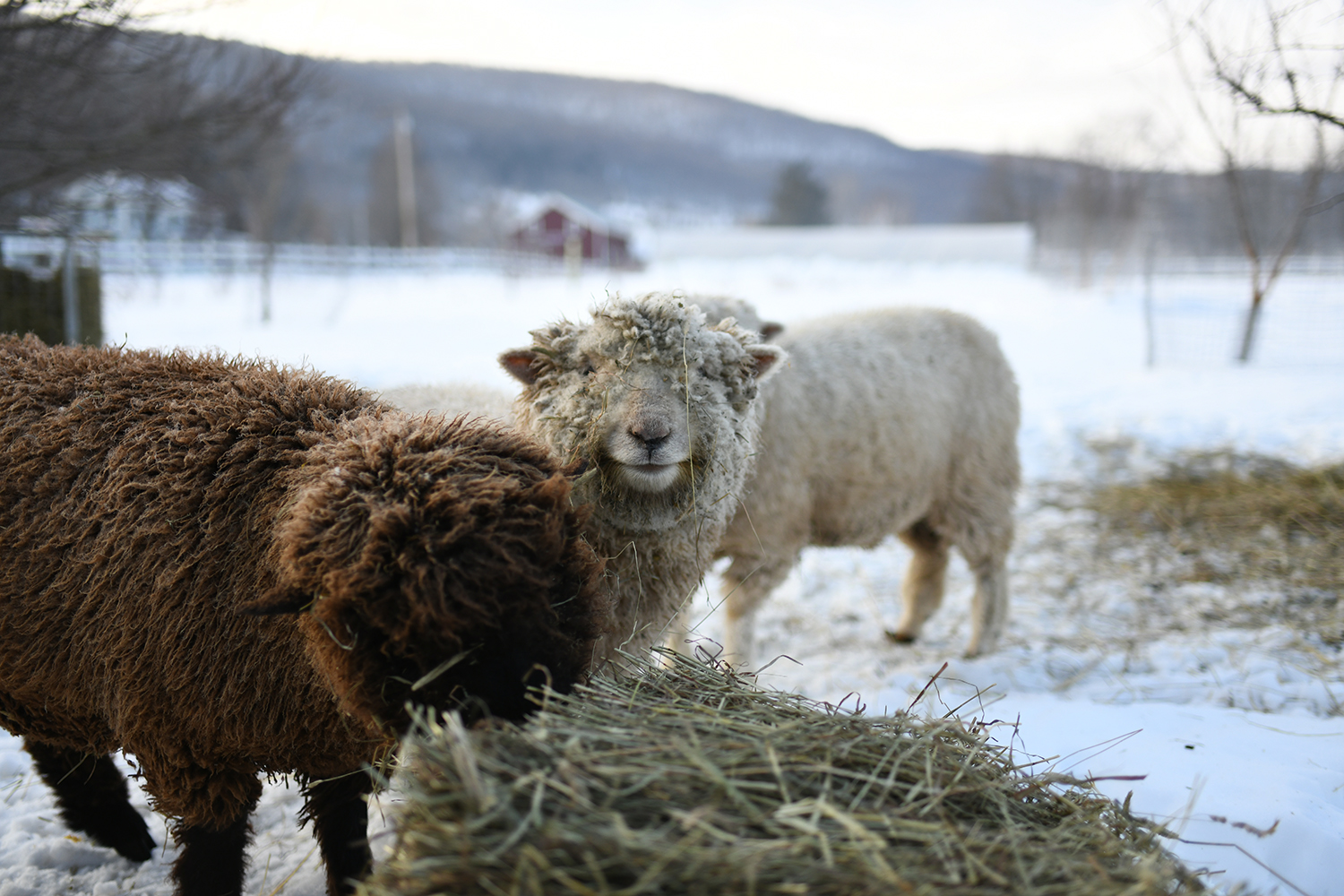 From left: Teddy, a Shetland Sheep, and Sir Paul, a babydoll sheep, on Ludwicki’s farm in Delaware County.

Visit an upstate home, and odds are you’ll see a sheepskin elegantly draped over a chair or bench. They’re everywhere, and for good reason: warm, soft, and organic, they’re an easy final touch for the Upstate hygge vibe we all covet.

But typical sheepskins are sold as pelts, which are unsustainable and harmful to the animals. Jess Ludwicki, the fiber artist and founder of Love Lamb, has solved that problem, creating one-of-a-kind sheepskins by hand that are both cruelty-free and environmentally-friendly. Using raw sheep’s fleece and hand-felting techniques to hold the “skin” together, Ludwicki creates sheepskins of varying sizes, colors, and textures, moving beyond the limits of conventional animal pelts and adding her own artistry to each piece.

Below, Ludwicki shares the origins of Love Lamb, her felting process, and what it’s like to live on a working farm in Delaware County. 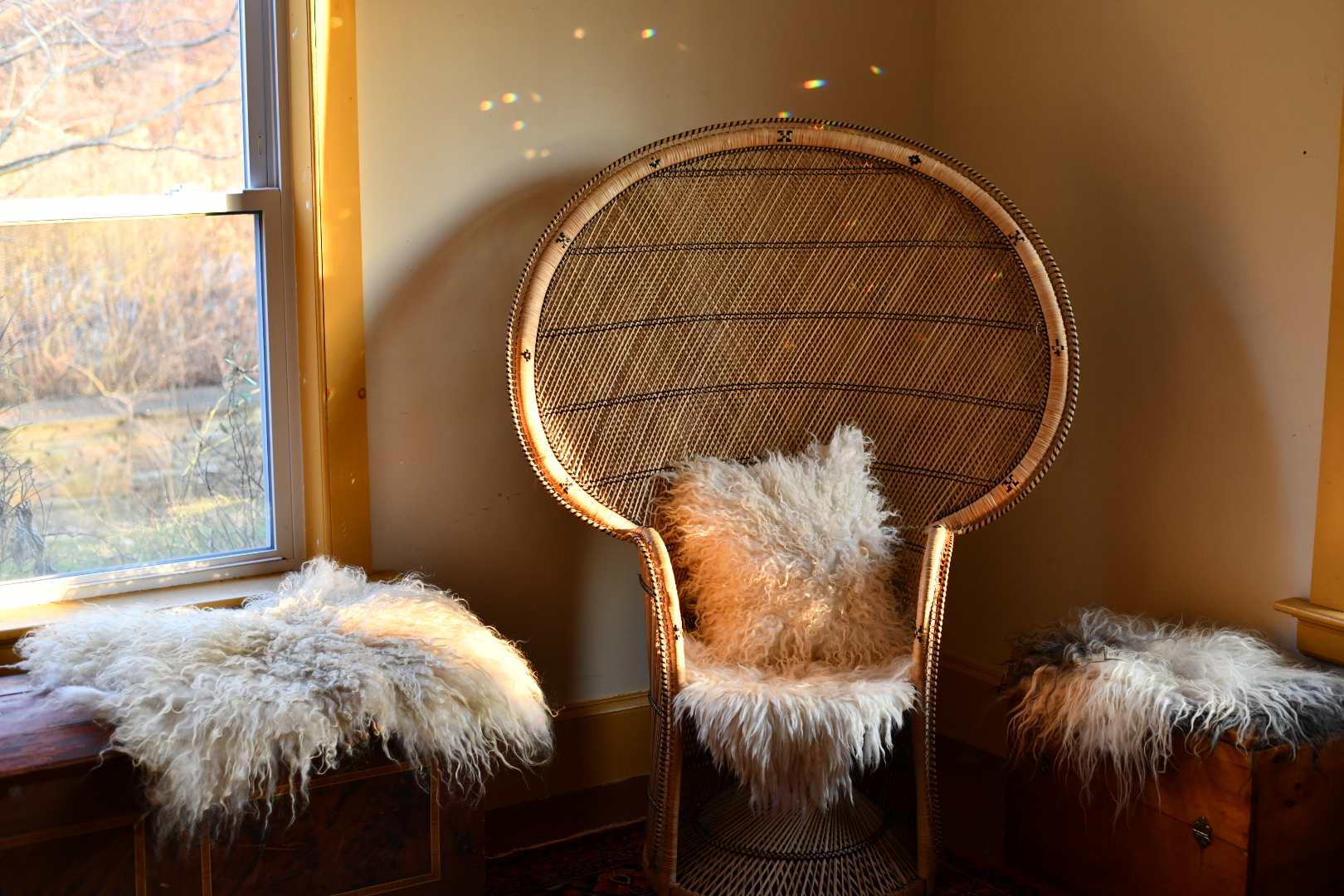 Ludwicki’s favorite places for a sheepskin? On your lap, or on a trunk—turning storage into seating.

You’ve mentioned that Love Lamb started over the course of one long winter. Can you elaborate on the genesis of the idea? How did you start making sheepskins?

Winters in Upstate New York are long, and if you don’t line up projects for yourself, you can start to lose your mind. I wanted to grow something here on the farm that I could spend my winters inside processing. I also wanted to add livestock to our operation but knew that I didn’t want to raise animals for meat, so fiber producers—goat, sheep, alpaca, etc—made the most sense. I began researching all the different breeds and crafts associated with wool.

Like most people, I began with yarn. I quickly realized that I was a terrible knitter and put the whole idea aside. Then one day, I saw my friend Irene from Wayside Cider wearing an old wool sweater that she had patched with a piece of wool felt. A light bulb went off in my head. I remembered that felt could be made with wool and began felting scarves and bandanas at home.

I was just naturally really good at it. Somewhere along my felt-making journey I realized that I could maybe felt a fleece into what appears to be a sheepskin. I did some googling and discovered that people in Europe and other parts of the world were doing this.

Did you begin with wool from your own sheep?

No, I began by sourcing locally from other farms. I not only wanted to support my fellow farmers, but wanted to absorb as much knowledge as I possibly could on raising sheep before acquiring my own.

Every wool-buy became an extremely valuable education session on fiber production and raising livestock in upstate NY. I also wanted to touch and see all the different varieties of fleece out there before deciding on what breed was right for my farm.

What is the shearing process like? Does the wool undergo any processing?

Shearing is a pretty fast and painless process. Sheep have actually been bred and domesticated to produce thick heavy coats that do not shed. They rely on farmers to shear them annually. If not shorn, their fleece can become matted and overgrown and cause a variety of health problems.

I work with raw unprocessed fleece straight off the back of the animal. First, I skirt it. This means removing any sections that are filthy and unusable. Then it is washed and felted at the same time. I buy already processed backing material, either in roving form or as wool batts. The final stage involves a lot of picking. Even after washing there is always some hay in the fleece to be removed. 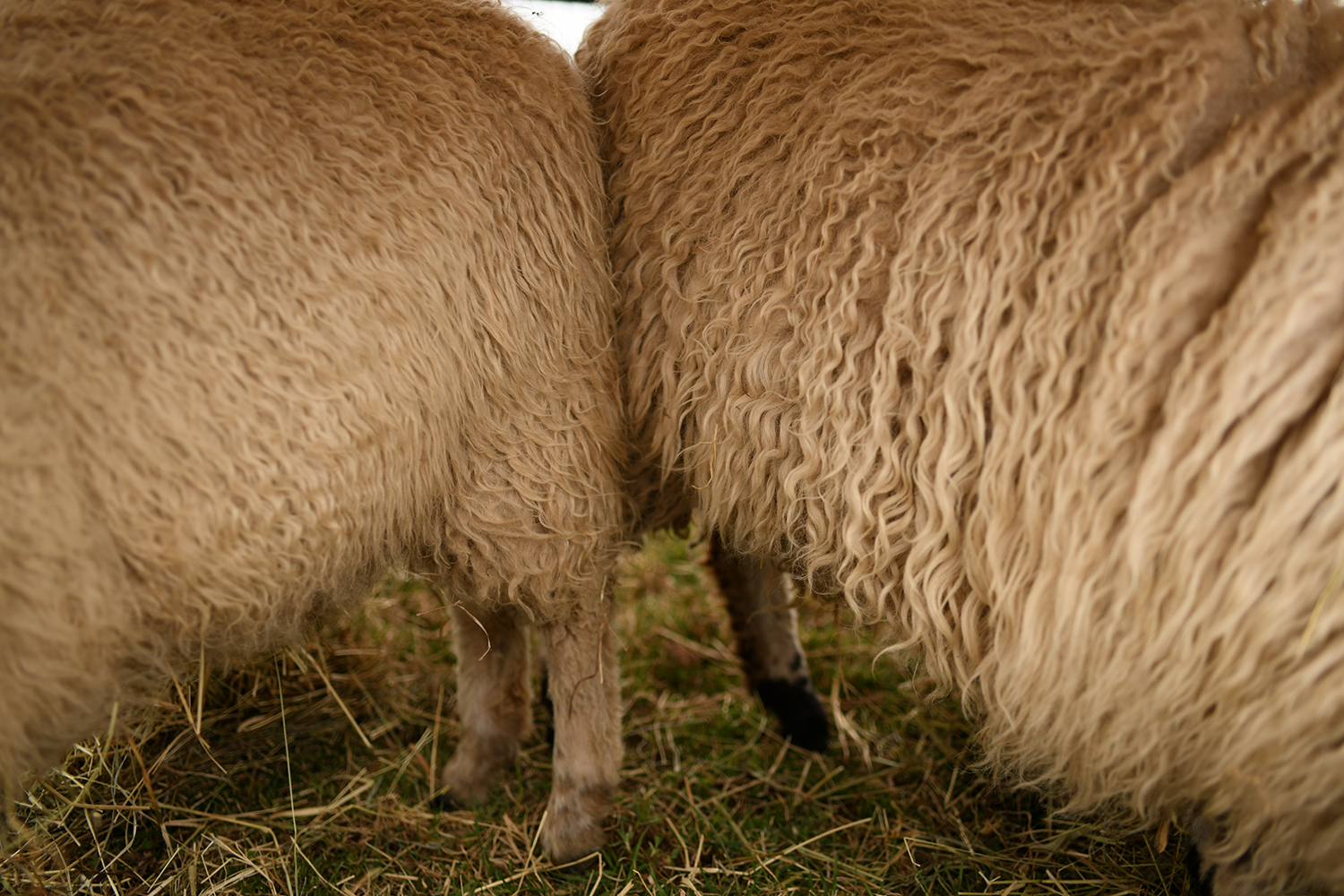 Shearing is a necessary and painless process, one that sheep rely on for their health.

I learned it all from YouTube. I started small. I began felting bandanas and experimenting with different breeds and fibers. Not all fiber felts equally so there were a lot of failures along the way. For instance, Alpaca fiber will felt, but way more slowly than sheep’s wool. It was all trial and error.

In addition to being cruelty-free, felted sheepskins must also give you more creative license in the sheepskin’s design. When planning one out, what is the balance between honoring the original nature of the wool and giving your artistic hand to the end result?

I am totally able to combine multiple fleeces from different sheep into one piece (which I love to do) and which you don’t typically see in traditional sheepskins. I love mixing different colors and textures together.

Sometimes I get really lucky and unravel a recently shorn fleece that is clean and already quite beautiful. If it has unusual markings and doesn’t need much skirting then I will 100% “honor the original nature” and preserve it as best I can.

What’s most important to you when sourcing wool? How does rarity or heritage come into play?

The cleanliness, quality and rarity are all important. I am a member of the Livestock Conservancy which promotes endangered breeds that are facing extinction.

Since Merino has become the fashion industry standard, other breeds of sheep have fallen out of favor. This means there are less farmers out there raising – let’s say Teeswaters or Navajo-Churro – and so their numbers are declining globally.

Therefore, working with rare breeds is very important to me. If I can inspire others to make use of fiber from rare breeds, perhaps over time there will be a greater demand for these sheep and the beautiful, renewable, natural fiber they produce. 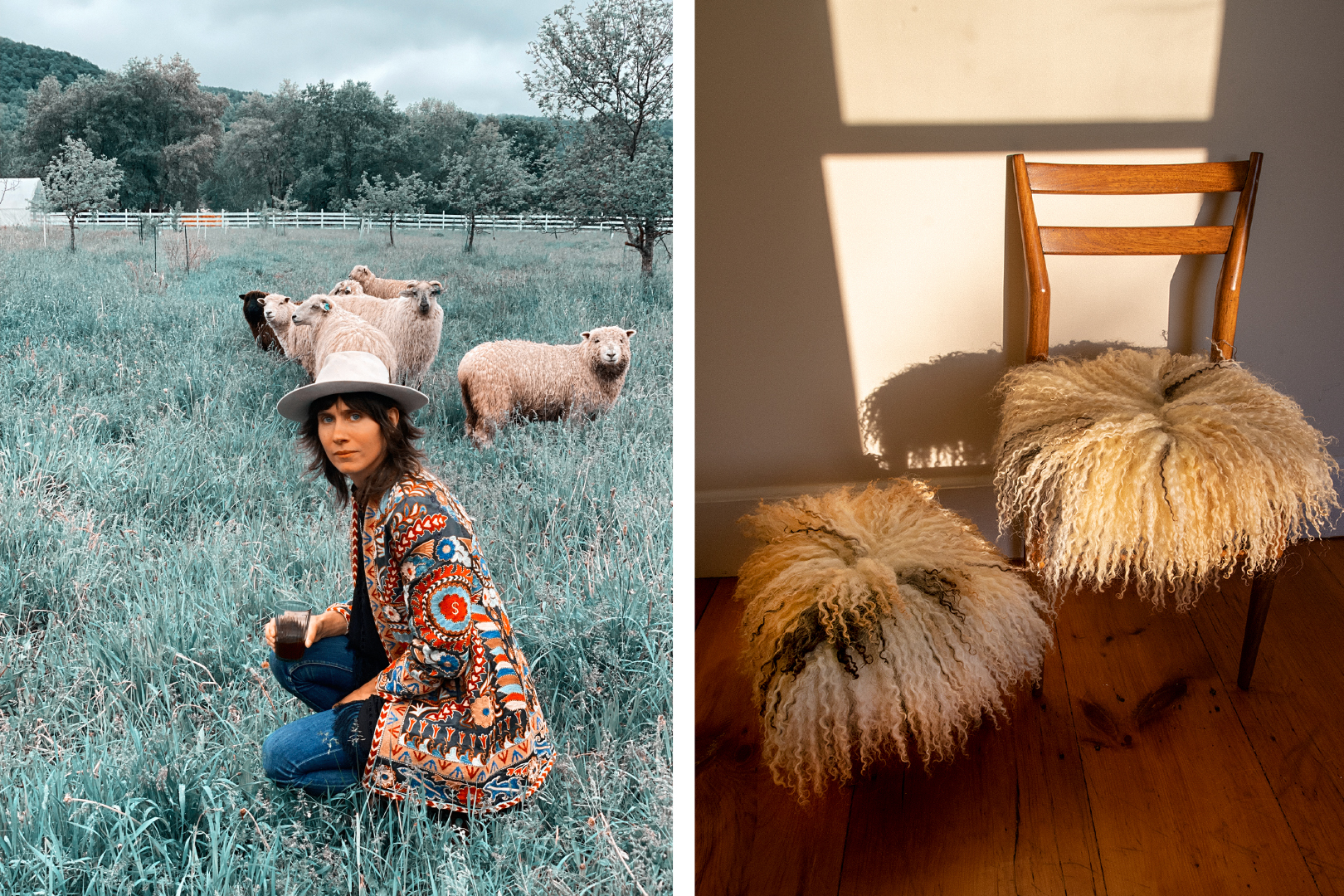 Left: Ludwicki on the farm. R: Hand-felting is not only cruelty-free, but allows Ludwicki to mix different textures and colors together.

Best unlikely place for a sheepskin?

On your lap! Traditional sheepskins that have cold sticky leather/skin on the back. Mine have wool felt backing and are super cozy to crawl underneath. I also love a sheepskin on top of a trunk with some pillows: why not turn a storage unit into a chic, cozy seat?

Do you mostly sell direct-to-consumer, or do you work with businesses as well?

Mostly direct-to-consumer via my website which I update monthly. There are a select few stores that I work with – Kria World in Margaretville being one of them. I will also be at Field & Supply in Kingston this May with a ton of fleeces for sale.

Do you take commissions?

Yes, I try to take on one or two big custom projects a year! 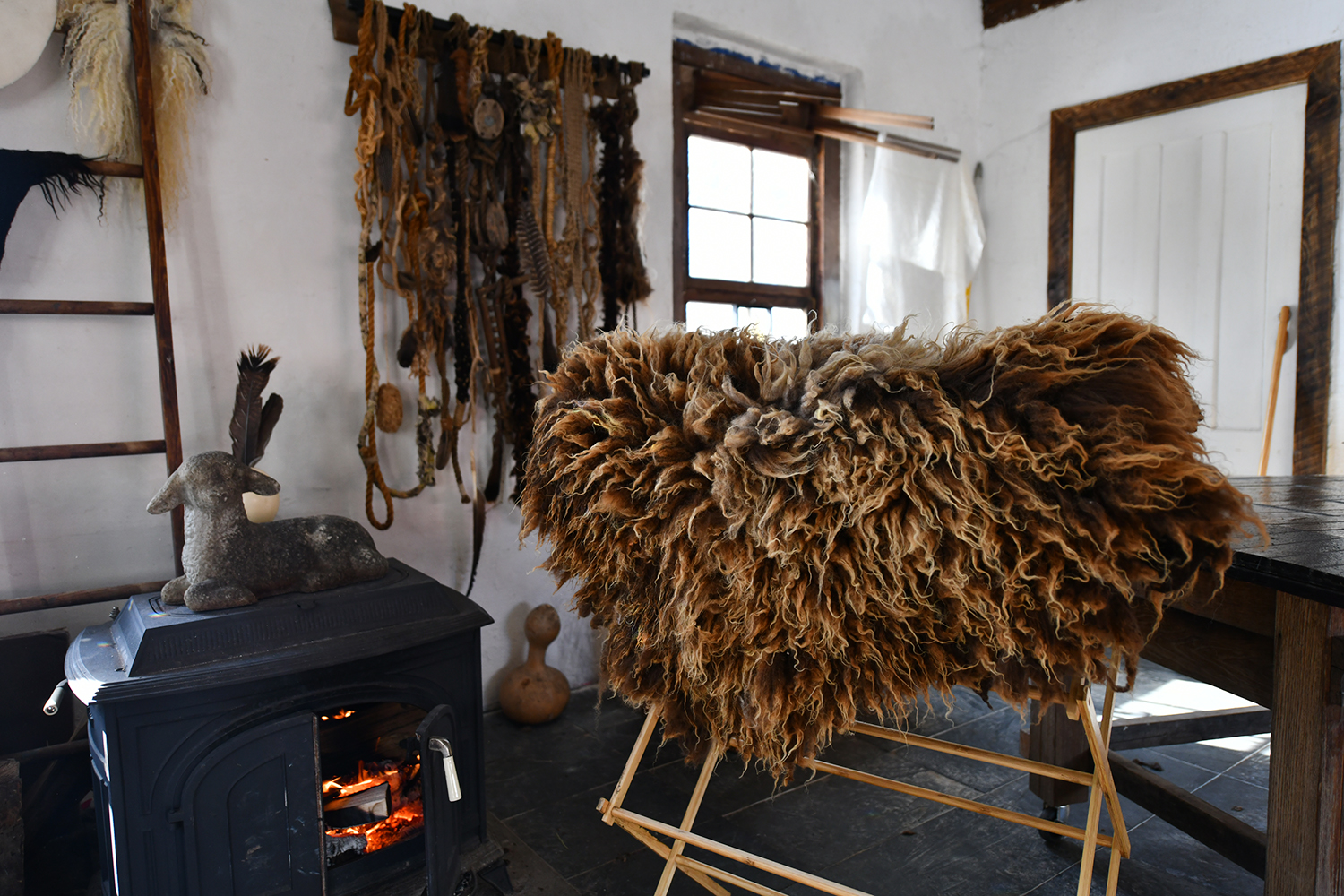 One of Love Lamb’s sheepskins drying by the fire in Ludwicki’s studio. Behind the fireplace is a wall hanging by fiber artist Toni Brogan.

How many sheep do you have on your farm now? And what other animals?

I have 6 sheep, 14 chickens, 2 dogs and 2 cats! It doesn’t sound like a lot but caring for 24 animals on a daily basis is definitely time consuming. The chickens are just egg layers and pets. The dogs are working breeds. Daisy is a Bernese Mountain dog and River a Great Pyrenees – a livestock guardian dog.

What are your Upstate recommendations for Escape Brooklyn readers? What’s a great day Upstate like for you?

Any Summer day spent on the river is a perfect day in my opinion. I am lucky to live on the West Branch of Delaware. We have a pretty ridiculous amount of frontage (it wraps around our 30 acre farm). For those that don’t have direct river access, there are plenty of amazing places to swim and relax though. Big Pond and Little Pond in Andes are two of my favorite places that are definitely worth a visit. 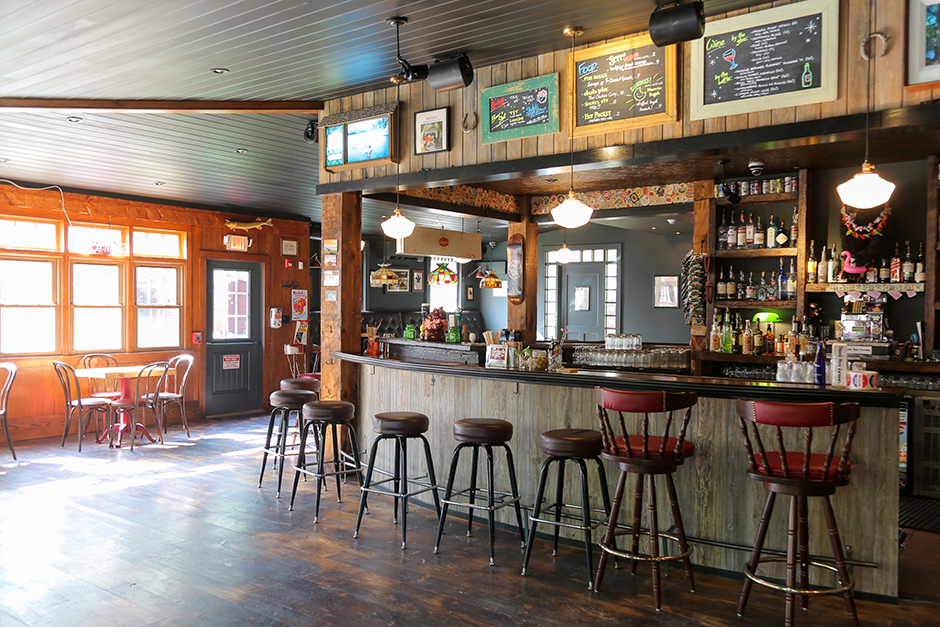 Amid a global pandemic, Tinker Street Tavern opened in July 2021. Aesthetes will find the space delightful; not a single opportunity to pay homage to the bar’s musical history was missed. The historic property was once owned by Albert Grossman — who managed Dylan, The Band, Janis Joplin and Todd Rundgren to name a few. 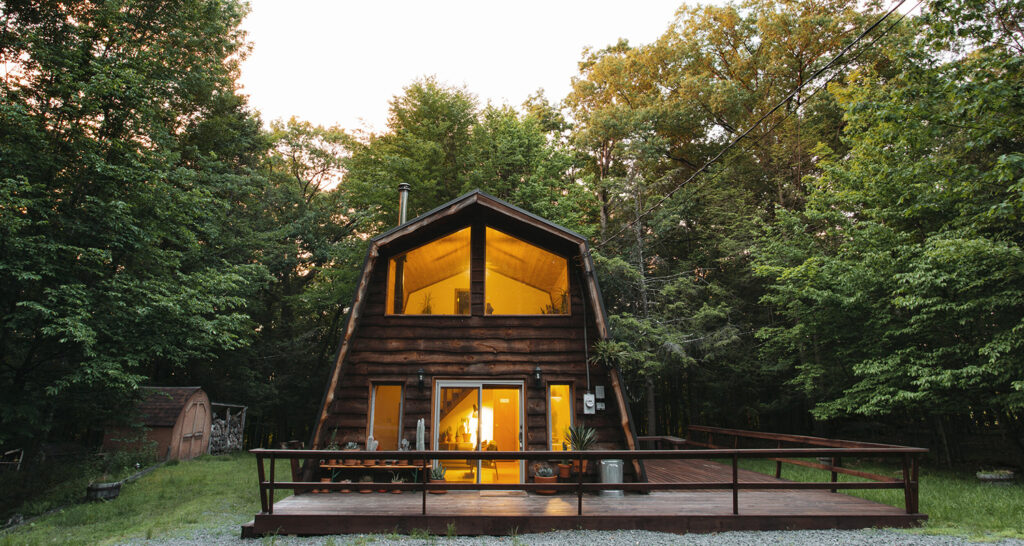 Before & After: Camp Caitlin 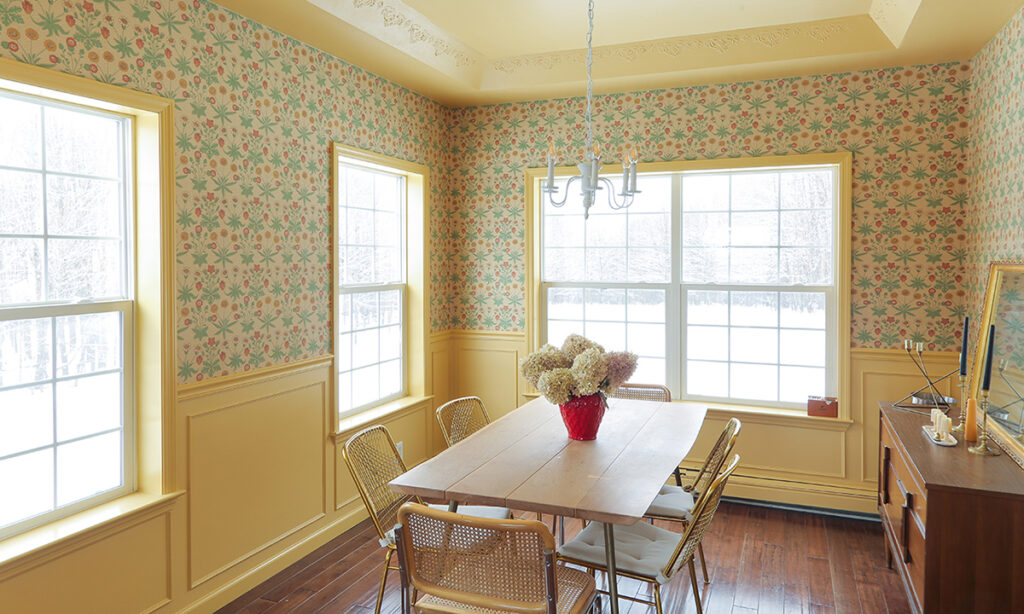 I recently moved upstate into a house with Very Boring Walls: bare except for the baseboards and some generic moldings around the doors and windows. The walls were beige and mint, and looked cookie-cutter and boxy, which — in this early aughts saltbox pre-fab — they were. They needed personality. So, with no previous experience and having never before used a saw, I decided to add some wainscoting. I had a tiny budget and no professional help, but installation was easy enough. The finished effect gave the walls texture and allowed for more color, pattern, and finishing options for each room. In short, they look incredible, and now the rooms practically beg for martini hour. 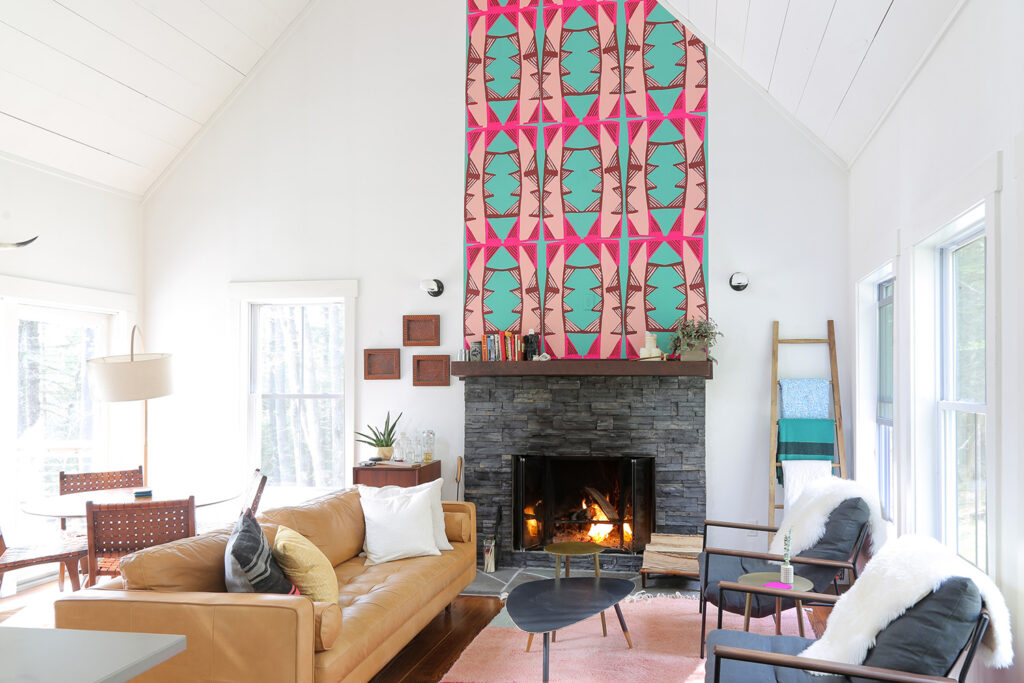 In a time of blandly Insta-generic wall art, Marcie Paper’s patterned murals buck the trend.
The Hudson Valley painter layers and repeats abstract motifs—like delicate spindles and bulbous pear shapes—to mesmerizing effect, drawing inspiration from personal memories, vintage textiles, and her own small-scale paintings.
The results are absorbing, highly detailed works of art that reveal themselves the longer one looks. Below, Paper discusses her relationship to memory and meaning, painting and patternmaking, form and function—and why she loves living upstate.